The area around Narita Station is home to many ramen restaurants.

Narita is a hot spot for lesser-known yet highly acclaimed ramen restaurants, known only to those in the know.

When you're traveling, be it for sightseeing or business, you tend to eat out for every meal — and that comes down to having richly flavored foods all the time.

That is why I've come up with a selection of lightly seasoned ramen that is easy to eat even when traveling. 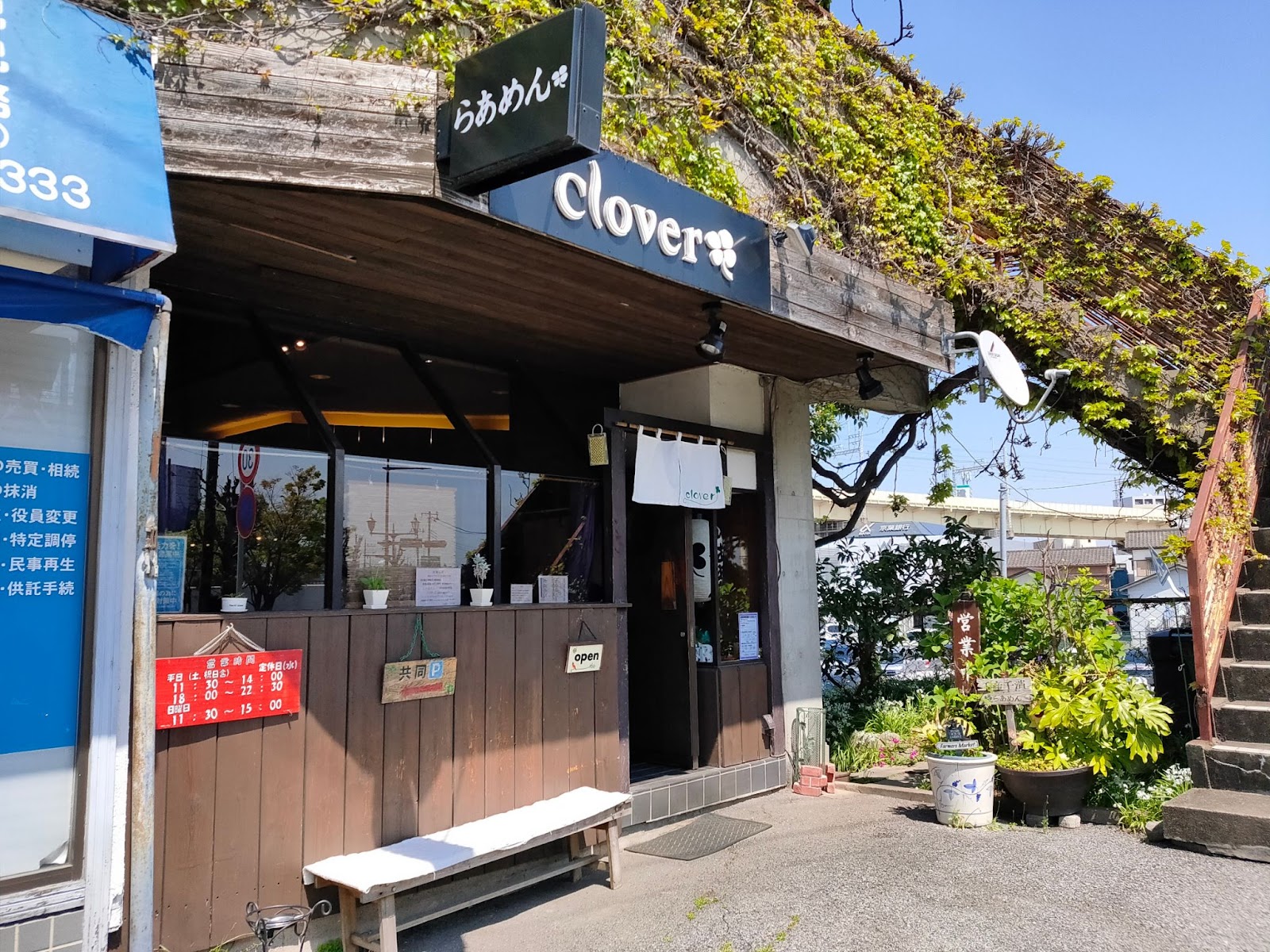 First up is Ramen Clover — a ramen shop that's a 5-minute walk from the Keisei Narita Station.

This ramen restaurant is well-liked among the locals as well.

Climb down the sloping path from the Narita Station, and you will see a cafe-style restaurant next to a park.

It's the only restaurant in that block, which makes it easy to spot, and its welcoming atmosphere greets you to come in.

I went there on a weekday afternoon.

And, it wasn't that I could walk in just because it was a weekday; there was a line-up outside the restaurant of about five people — comprising what I assume were nearby working men and college students. 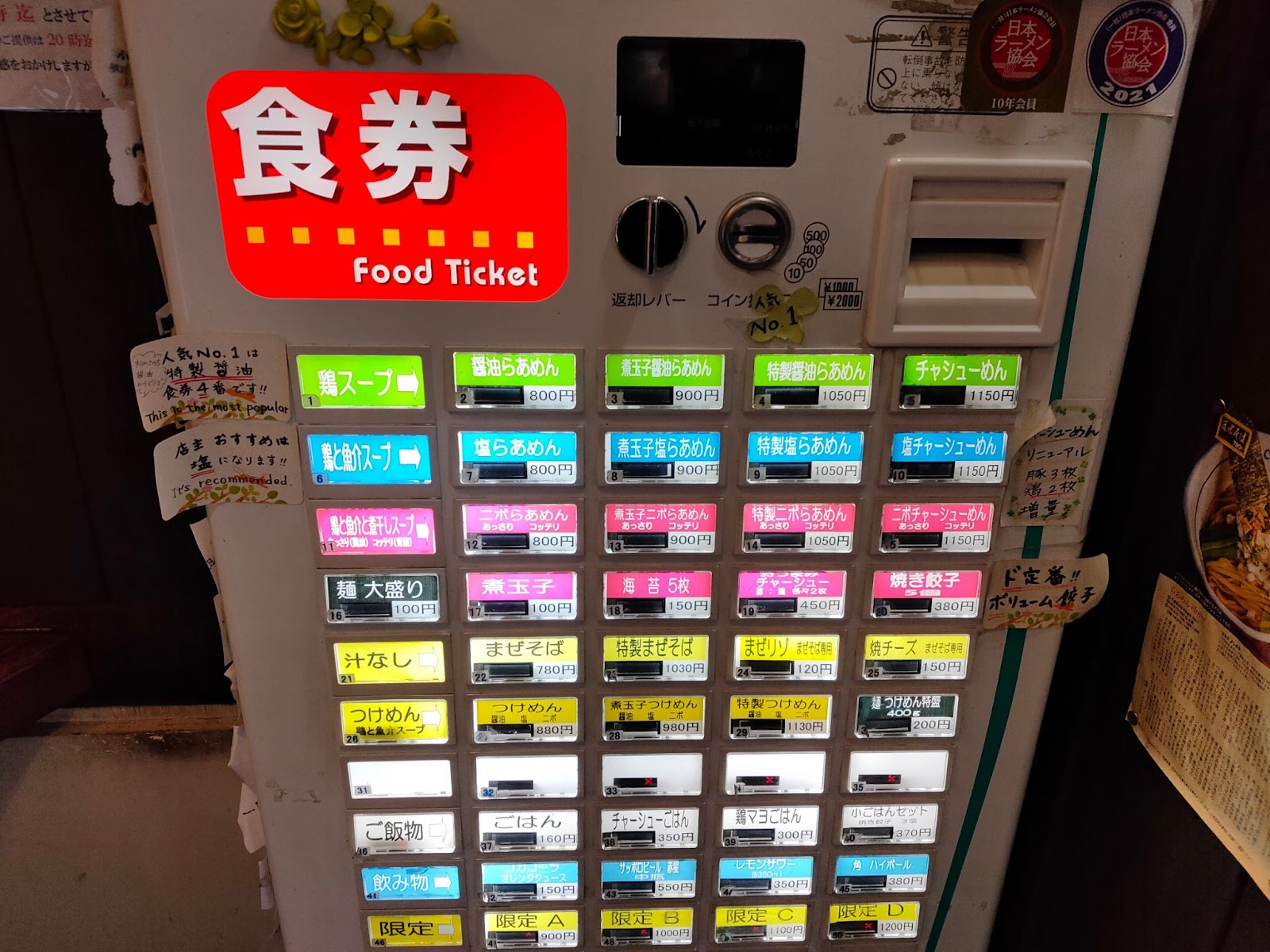 The restaurant uses a ticket machine to take orders.

Even when you're waiting in line, the restaurant staff will come outside and inform you about the timing to buy a meal order ticket — so you don't have to worry. 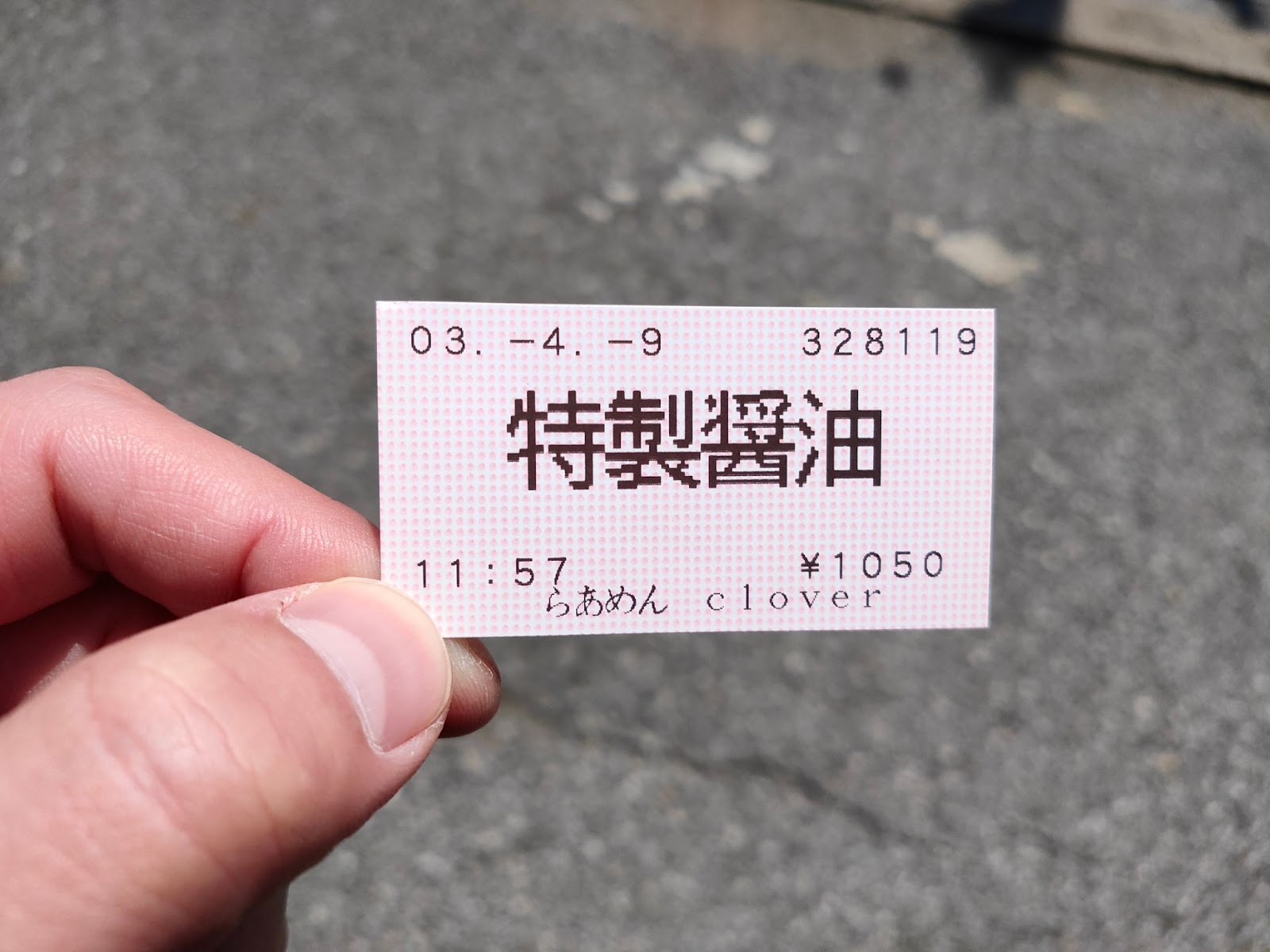 This time, I went for their most popular ramen — "Tokusei Shoyu" Special Shoyu Ramen.

Since the line-up was only about five people long, I got in within 15 minutes.<15分/b>

For seating, they have five seats at the counter and one low floor table for four.

It's small but not cramped, and overall it gives you an impression of being at home. 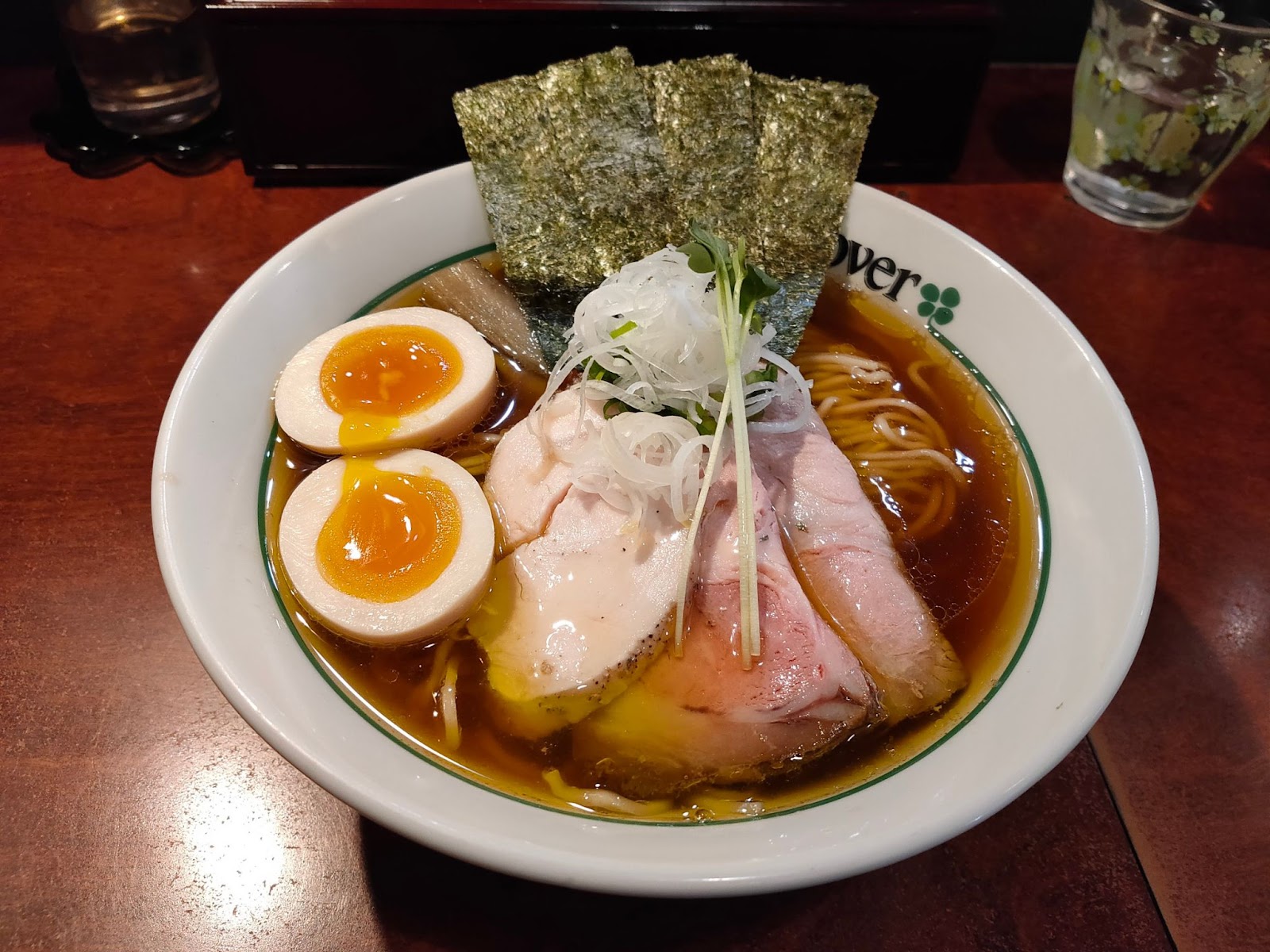 My ramen arrived at my table within five minutes of me taking a seat. 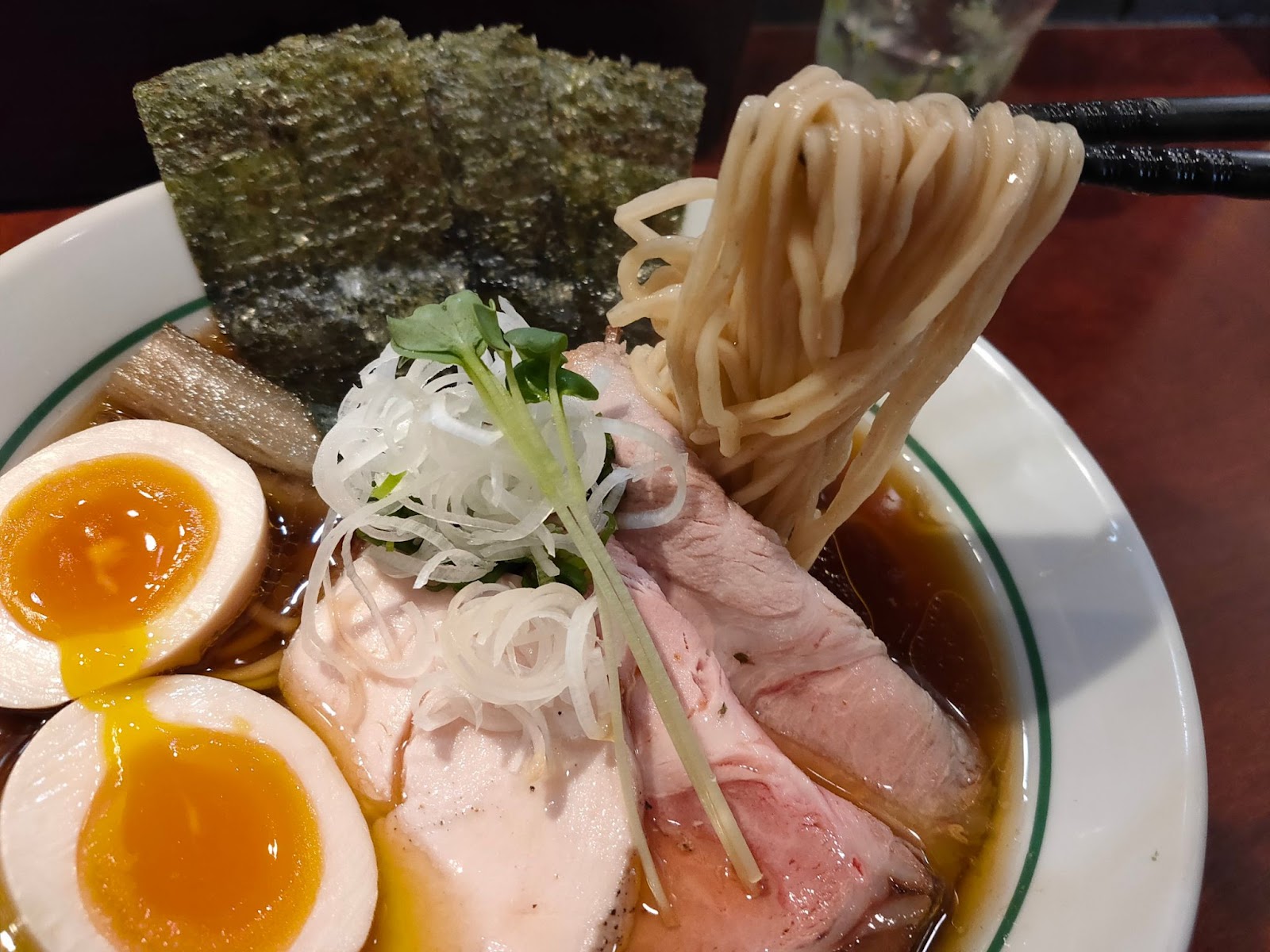 The soup, with its light seasoning, tastes so delicious!

The toppings as well are very easy to eat. You could eat there every day and still never get tired of the taste.

The ramen is easy to eat for women and the elderly as well — it's no wonder that the restaurant has many local fans. 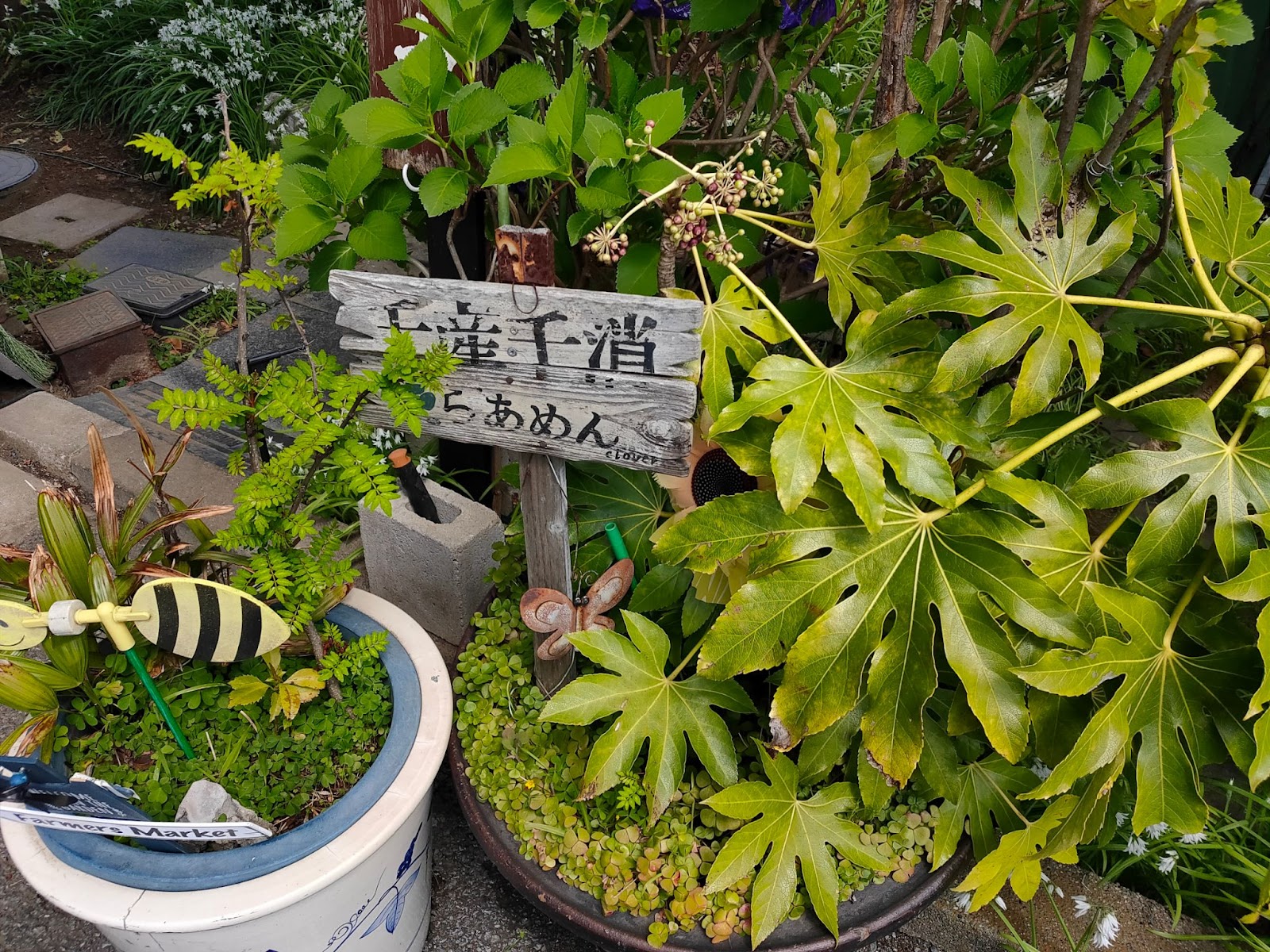 This board in front of the shop says "Chisan-Chisho" (Chiba produce for Chiba consumers). It seems they primarily use ingredients produced in Chiba.

You can sense their affection for their local land. 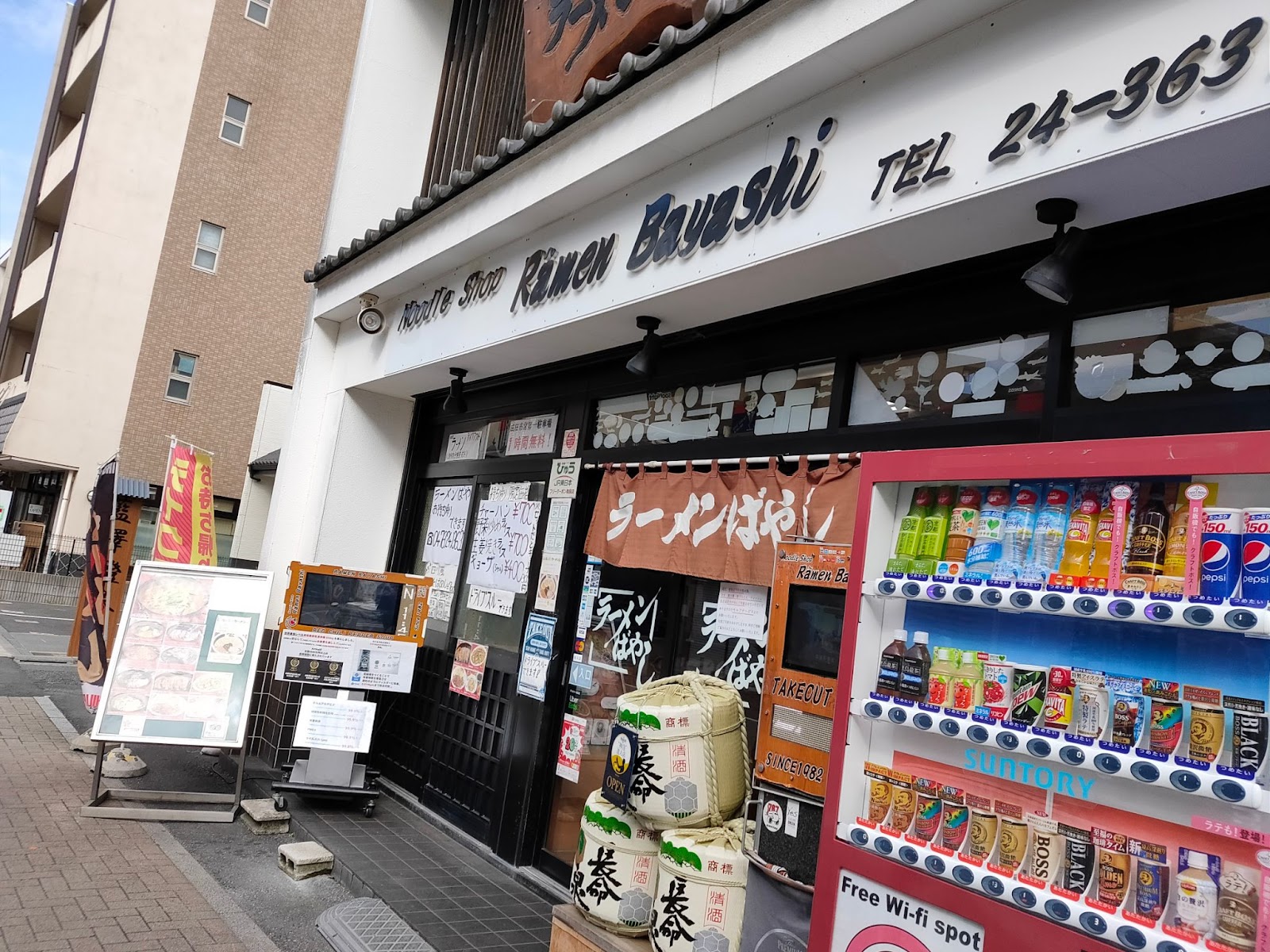 Next, I'd like to introduce you to Râmen Bayashi. It lies on the path leading to Naritasan Shinshoji Temple.

This restaurant is also quite famous.

The restaurant's in-store screens and menus also have English on them, which shows that they receive many foreign guests.

With music playing in the restaurant, it catches most people's attention as they walk along the path to the temple. 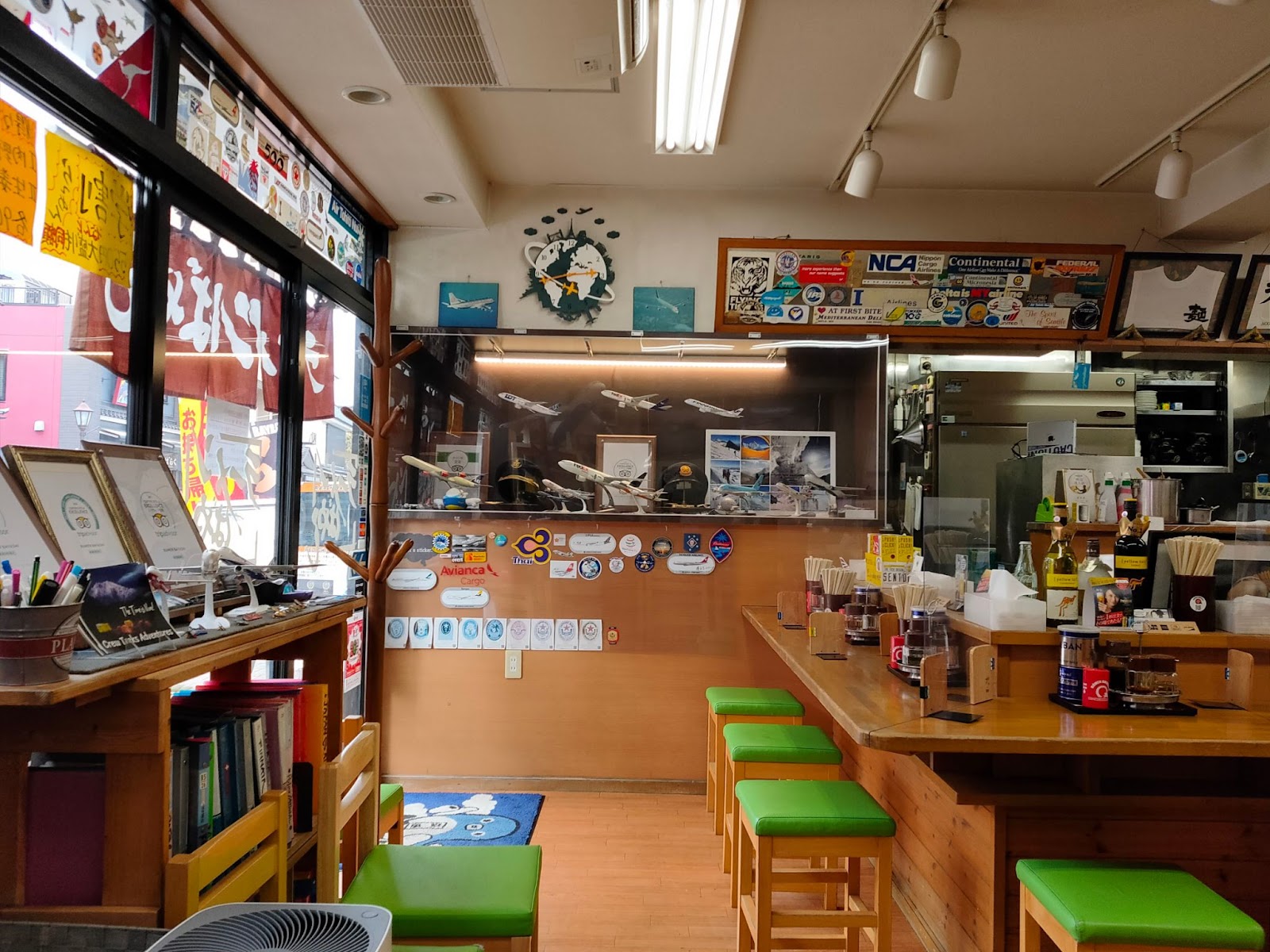 As it was 3 p.m. on a weekday, I was able to enter the restaurant right away.

Despite being during the coronavirus pandemic, a western woman was there at the counter by herself, slurping up her noodles with delight. 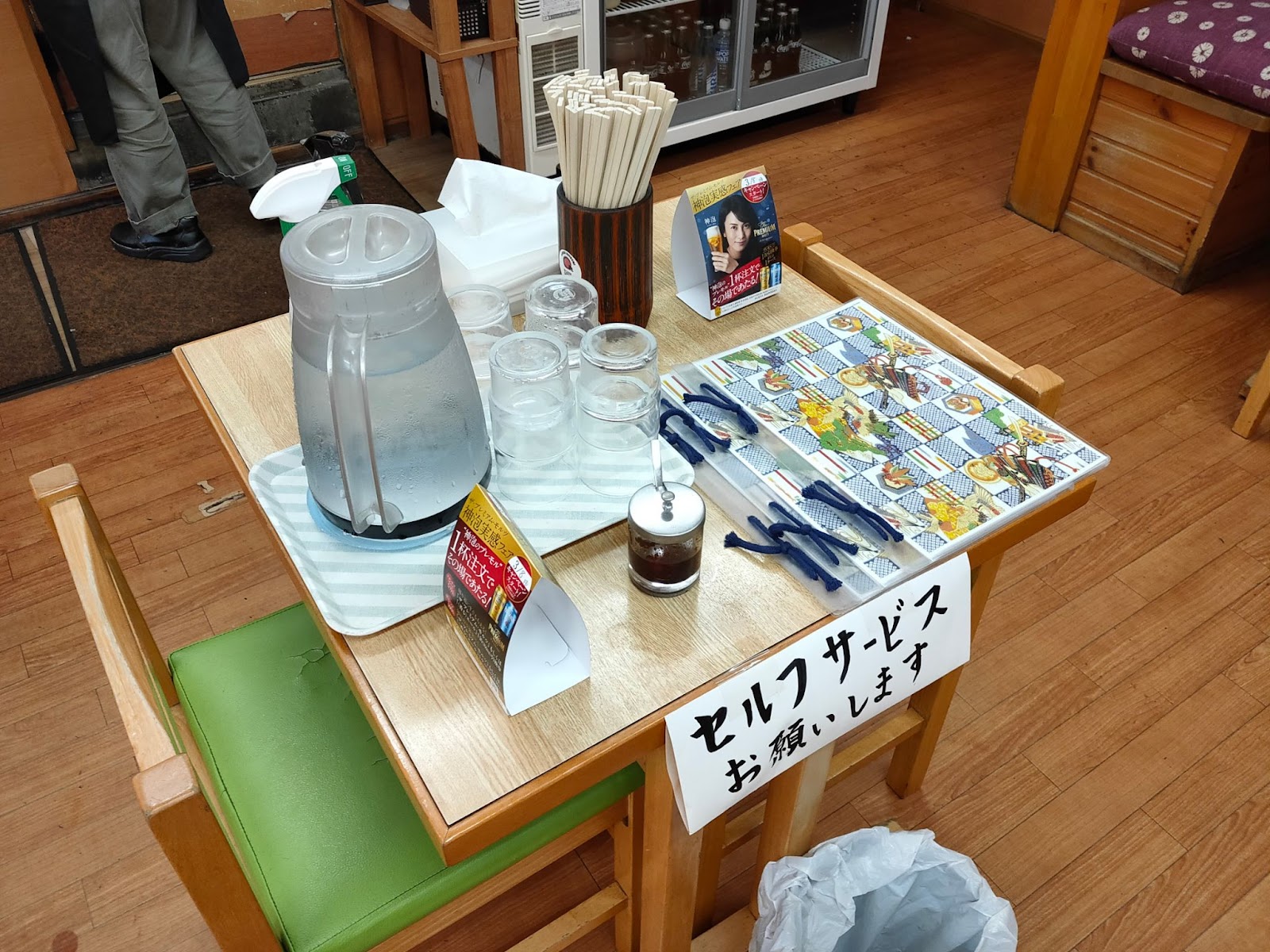 As for seating, they have seven seats at the counter and five table seatings for four people each. And in the middle of the restaurant, they have water and their menu in many different languages.

It's a self-serve-style table where all the guests can get water after disinfecting themselves using a sanitizing spray. 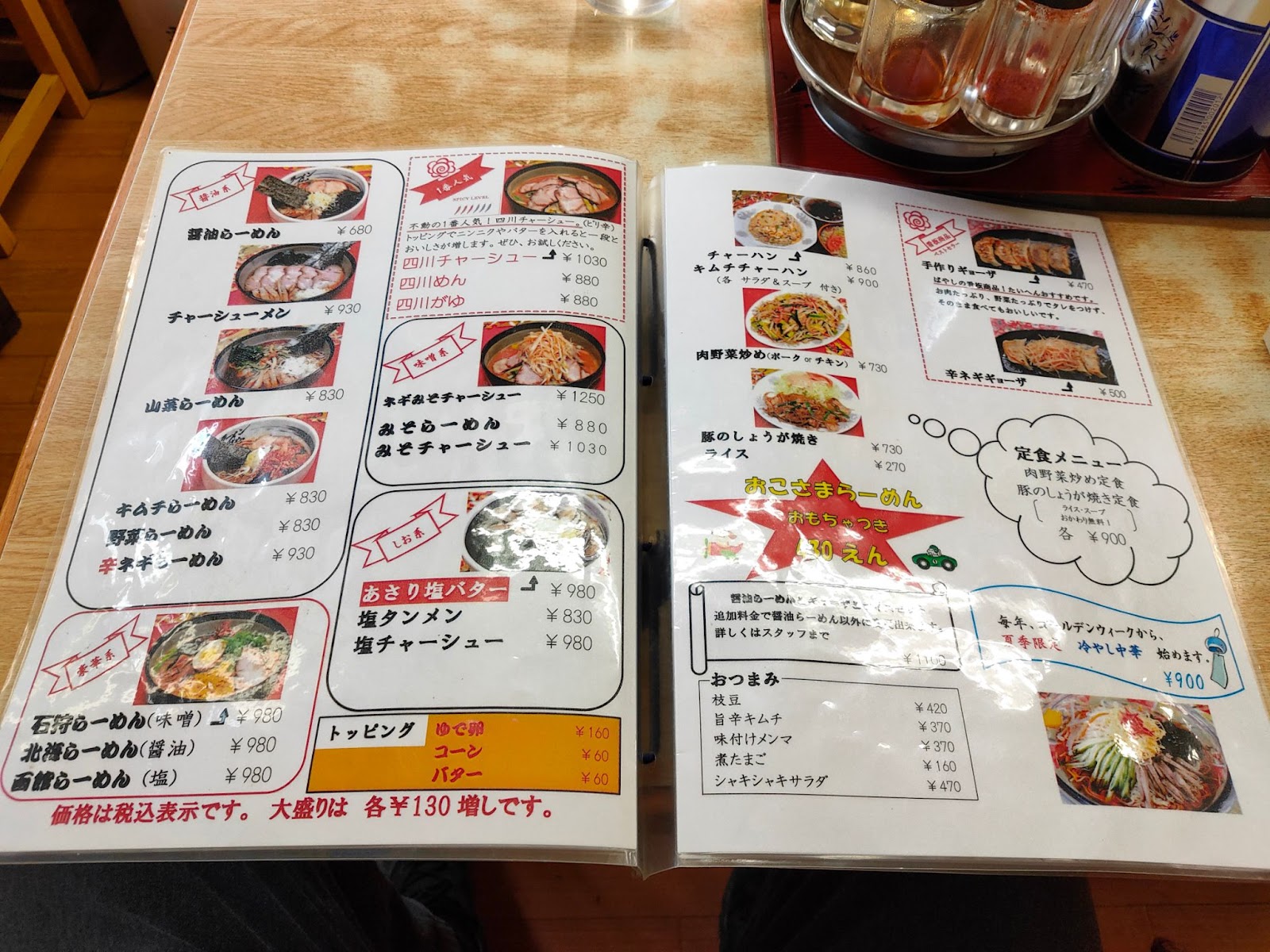 At this restaurant, you place your order by informing the staff after choosing from the menu.

Their menu touted the "Shisen Chashu Ramen" to be an all-time most favorite dish, so I ordered it. 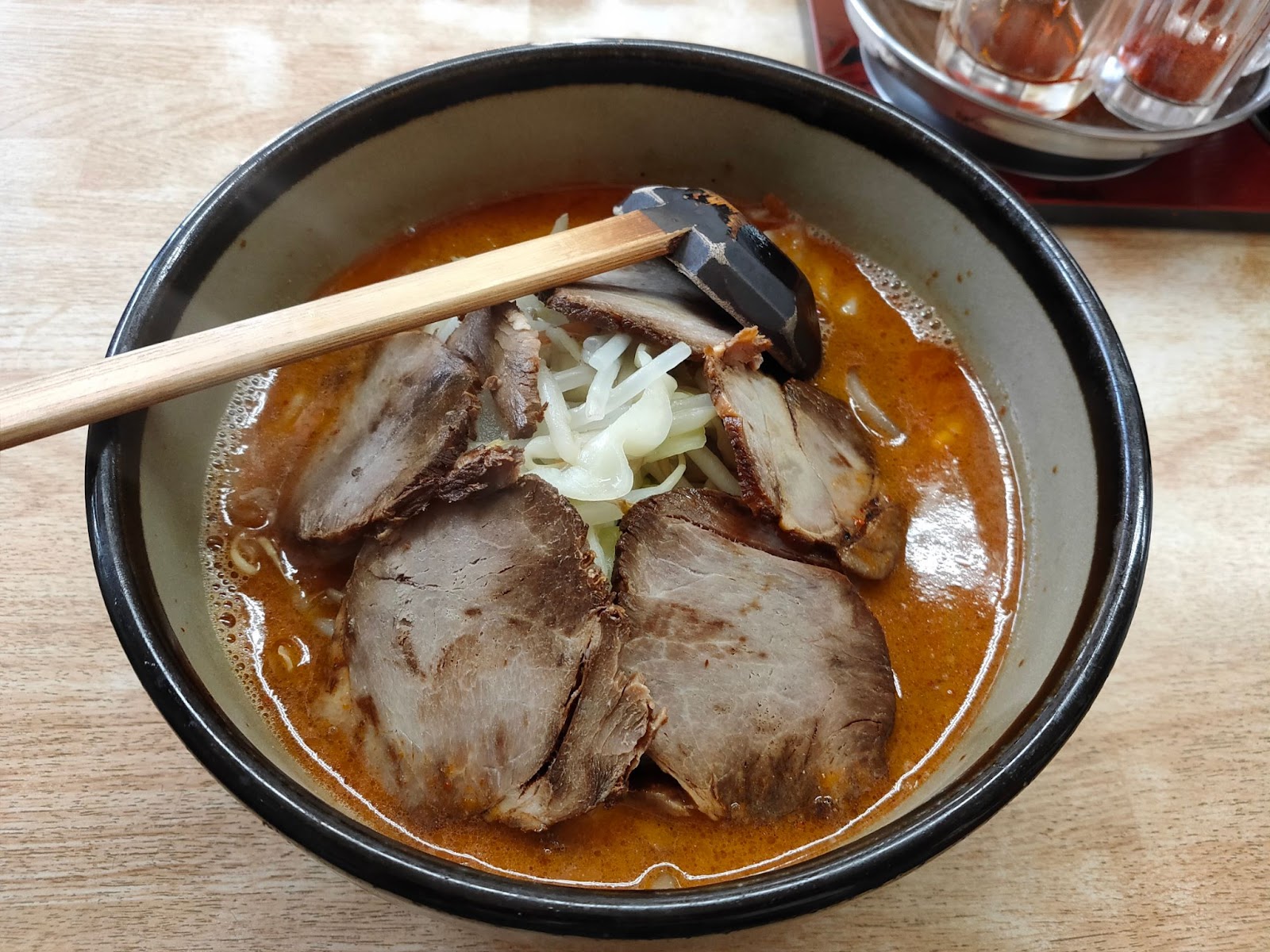 And again, my order was served within 5-minutes.

I was supposed to order lightly seasoned ramen, but the broth appeared to be thick and spicy.

I had started to wonder if I chose the wrong dish to order... 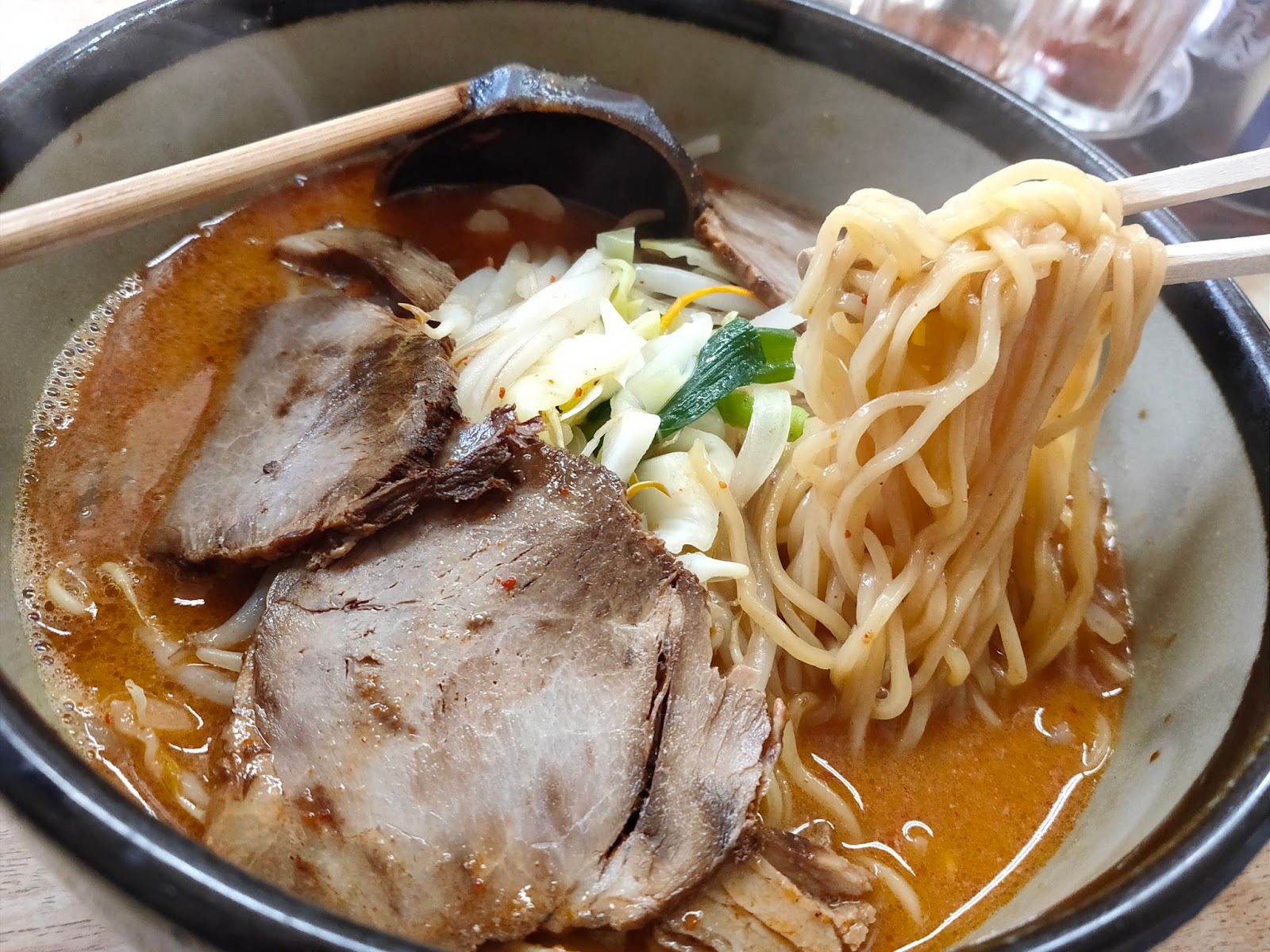 But upon eating the ramen, I found it to be surprisingly light and tasty!

It was elegant with the taste and flavor of sesame.

Tasting lighter than its appearance, it also seems to be quite popular among foreigners.

I, personally, find its spicy aftertaste quite addicting. 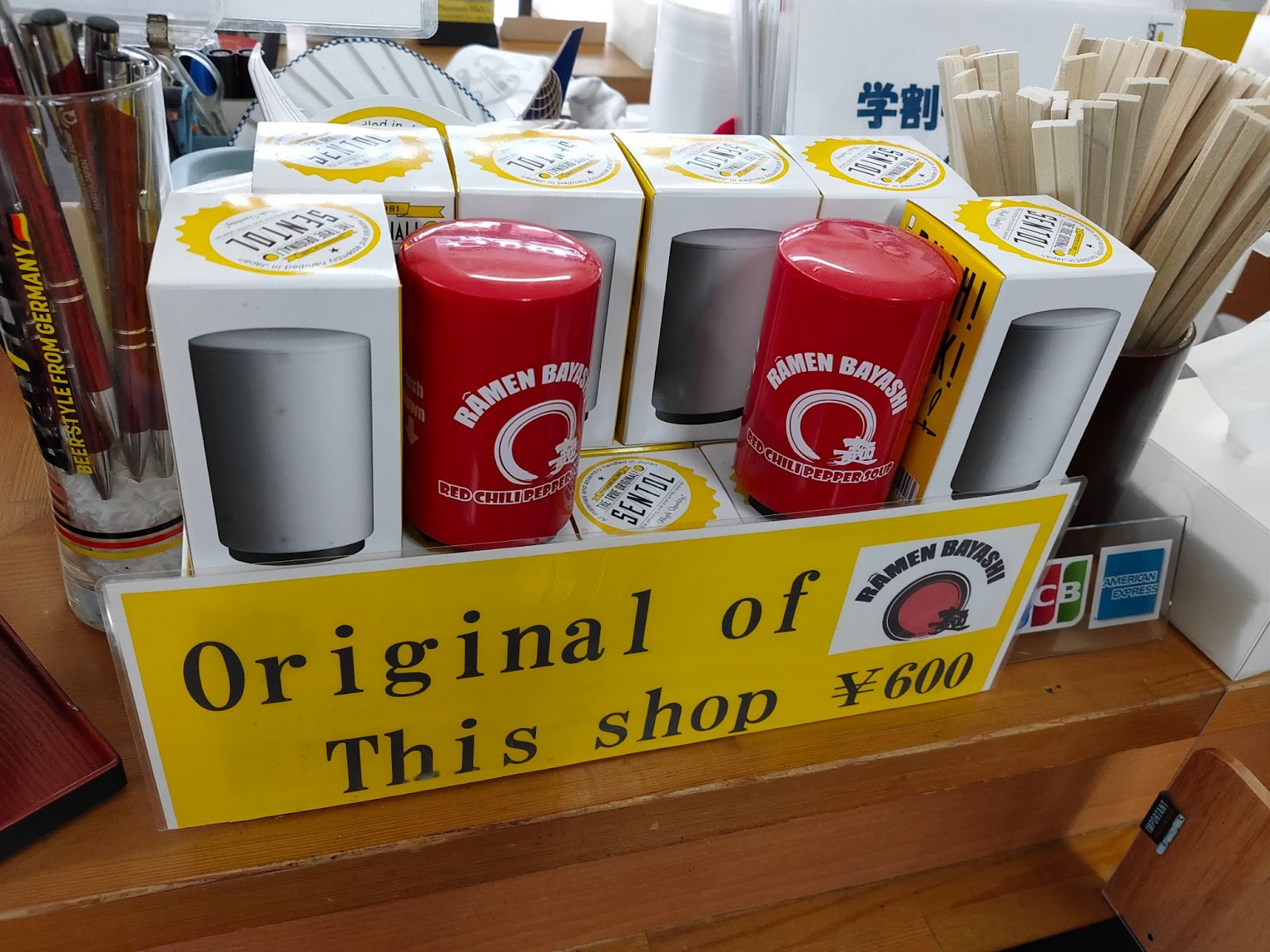 A variety of rare items relating to air travel adorn the shop's showcases and walls — reminding you that you are on Narita Airport's turf.

They also sell T-shirts, spice and seasoning containers, and other items that make good souvenirs. 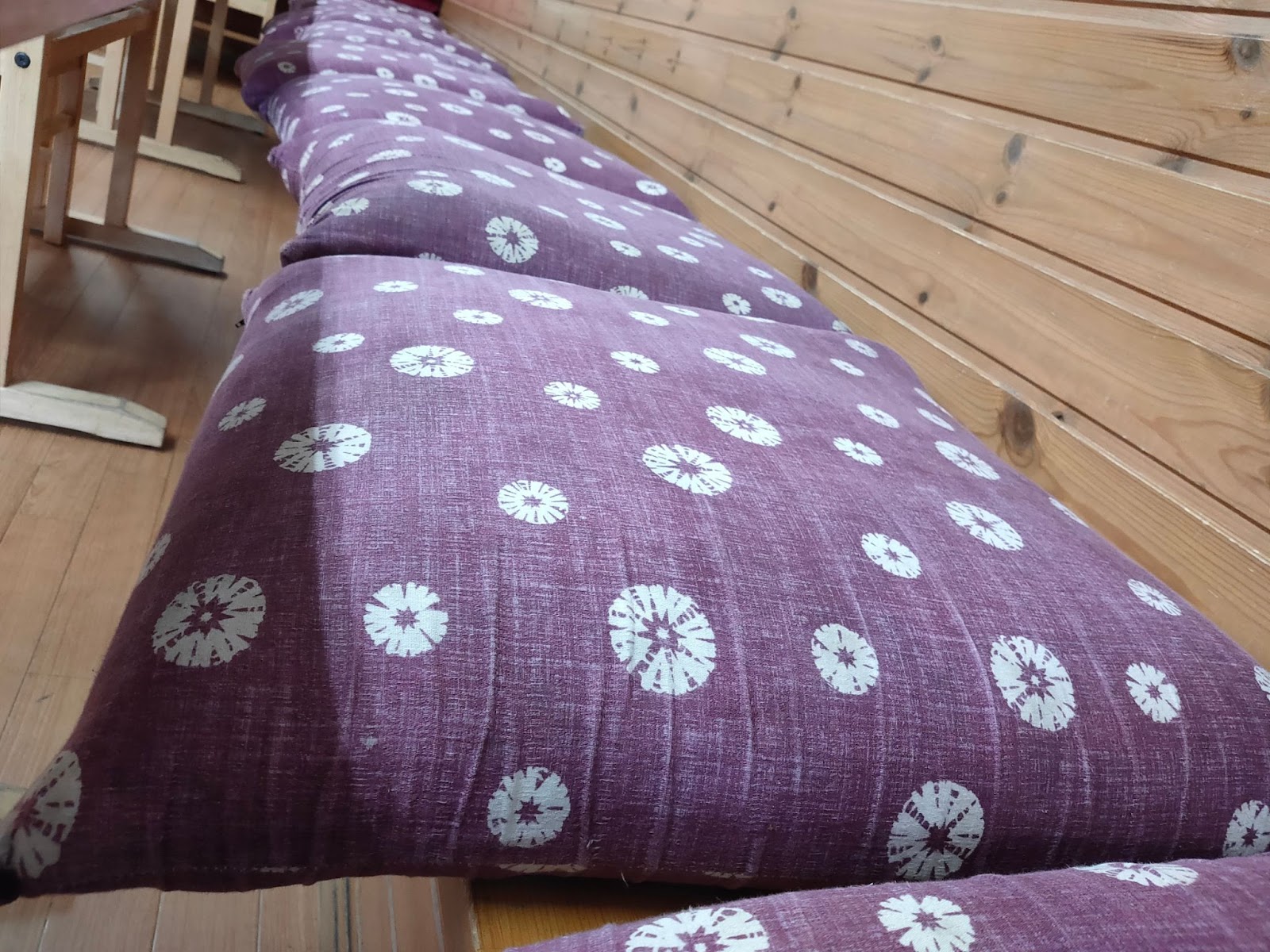 I was also impressed at how fluffy and comfortable their zabuton cushions were.

With outstanding ease of access and a rich menu, it's a nice spot to frequent and experience different kinds of ramen. 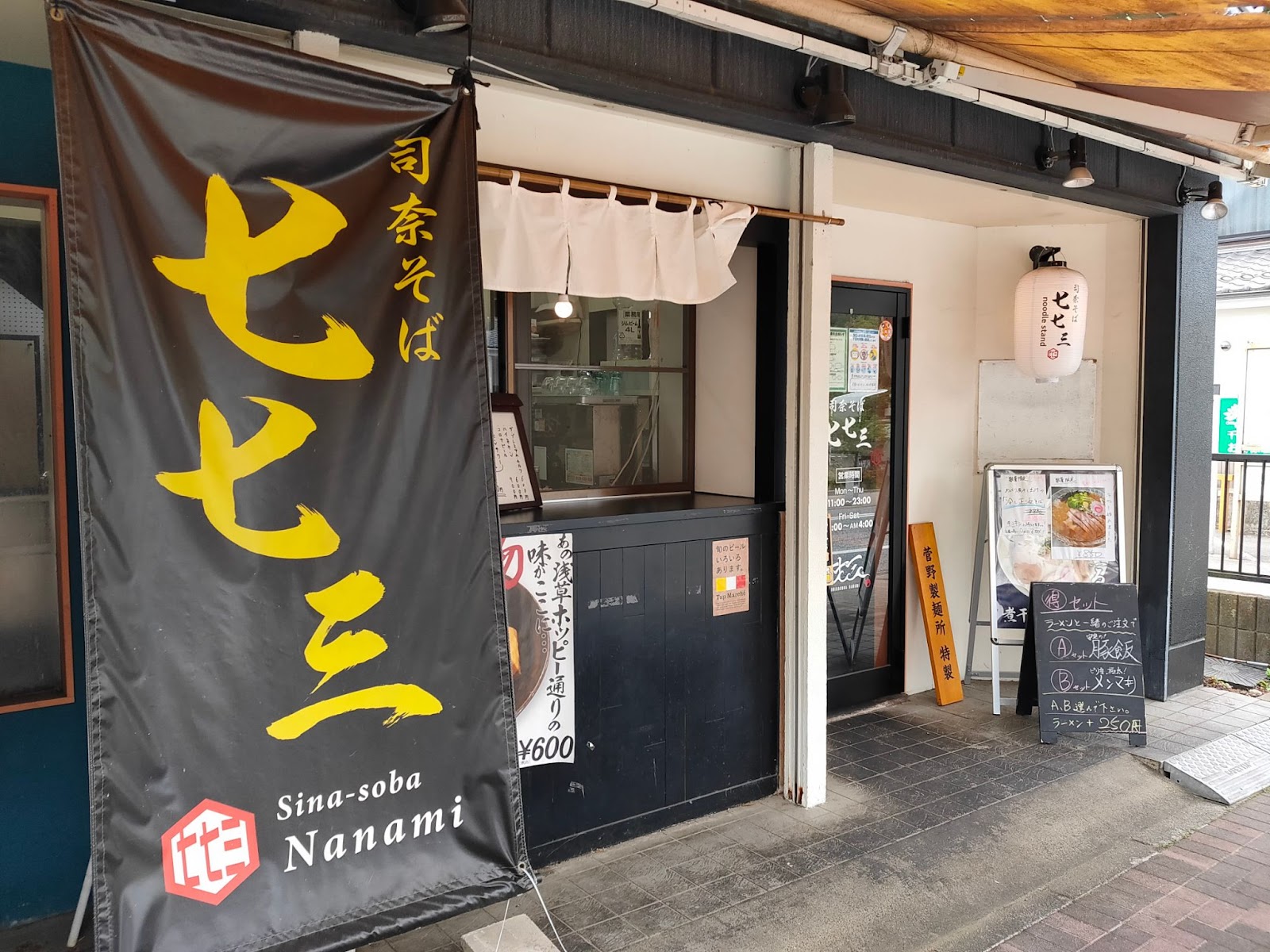 This Niboshi-styled ramen restaurant also lies along the path to the temple.

The restaurant, opened in 2019, is new when compared to the previous two.

There were about two customers there when we visited one afternoon during the declared state of emergency. 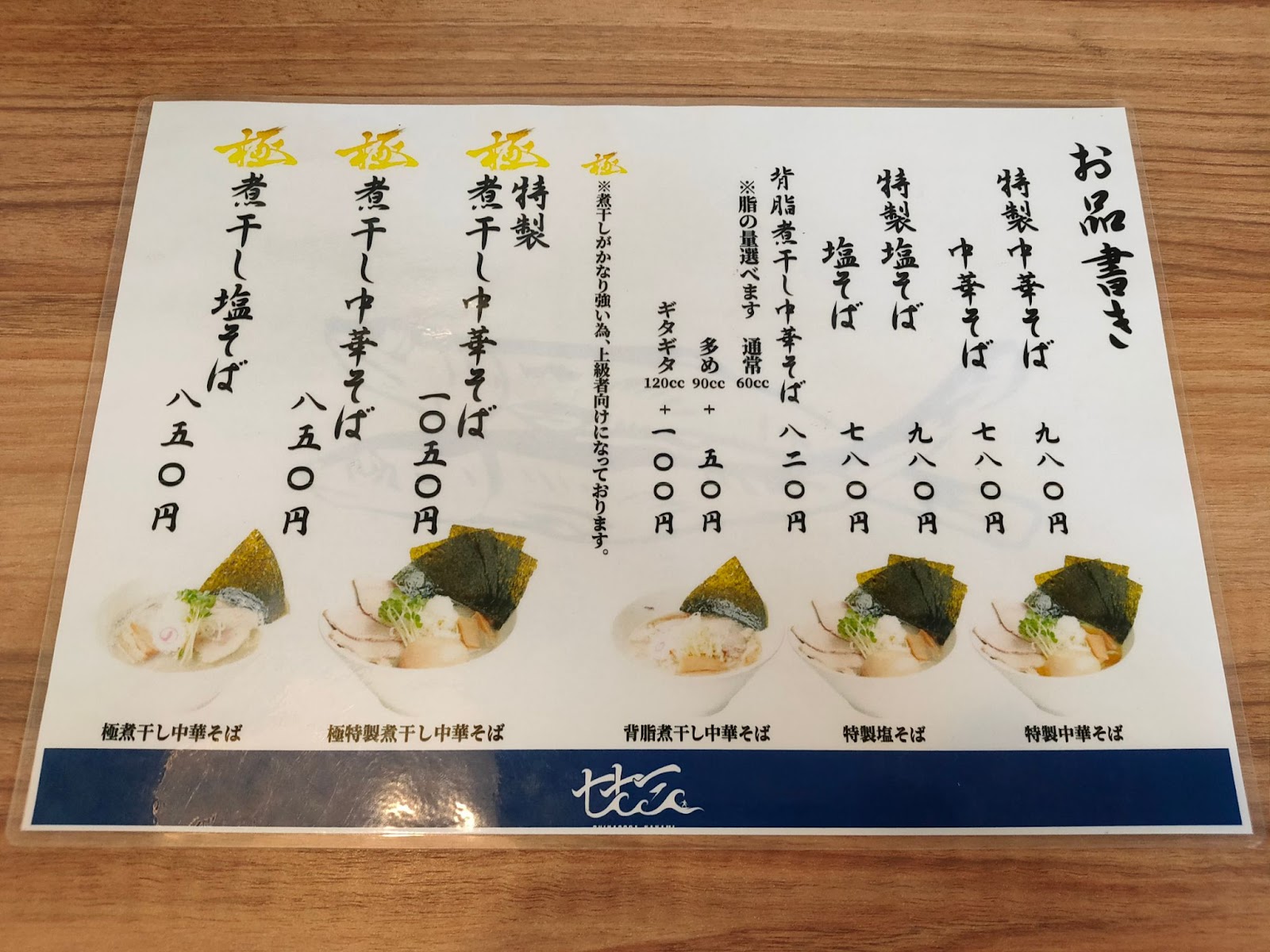 To place your order, you inform the staff directly at this restaurant as well. 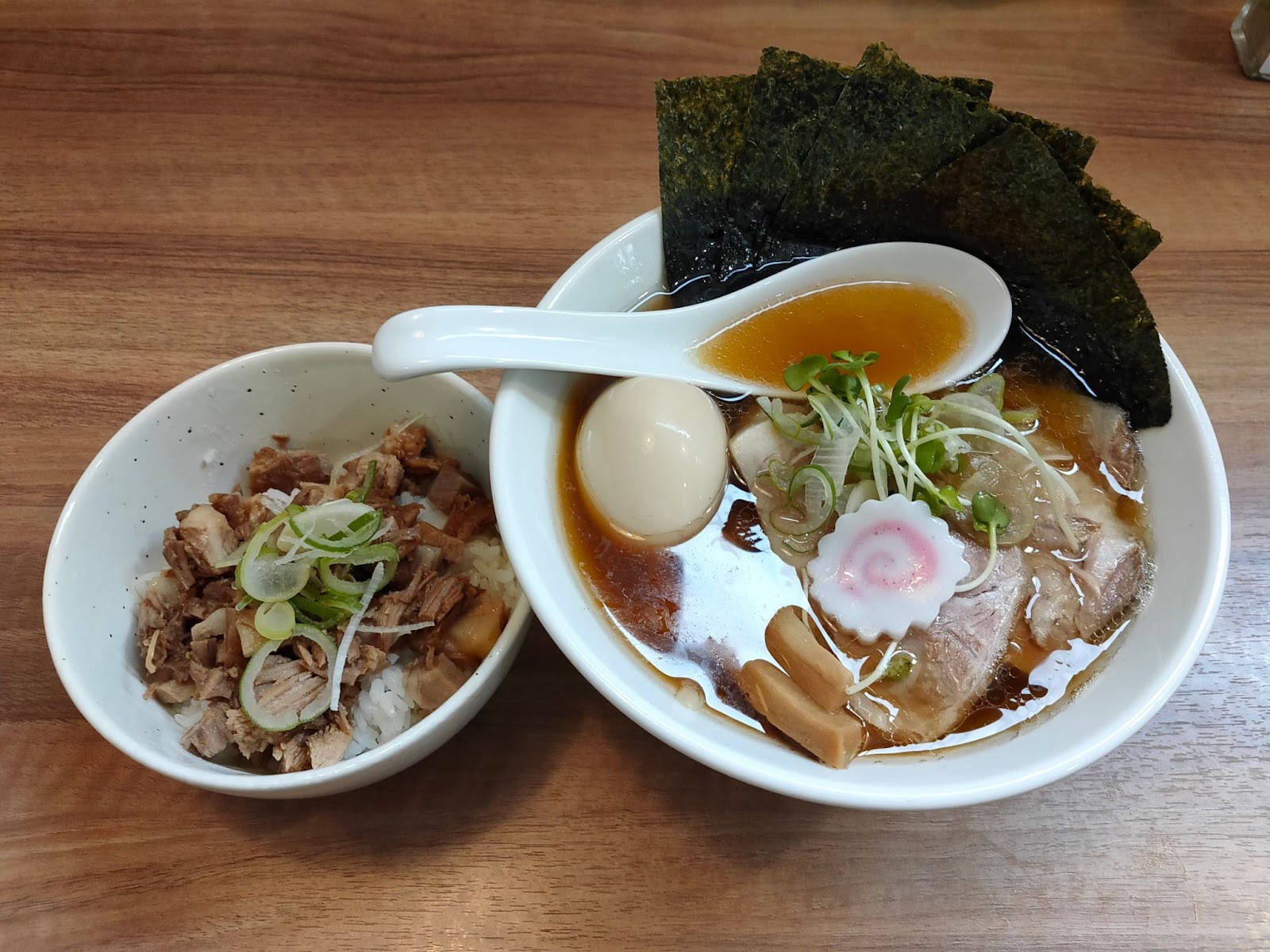 My food arrived after waiting for just about 3-minutes.

I'm surprised how fast all the restaurants served their ramen.

I also received the "Buta-meshi" (pork & rice), which I'd ordered together as a lunch set.

The golden-colored soup makes its appearance look all the more lightly seasoned. 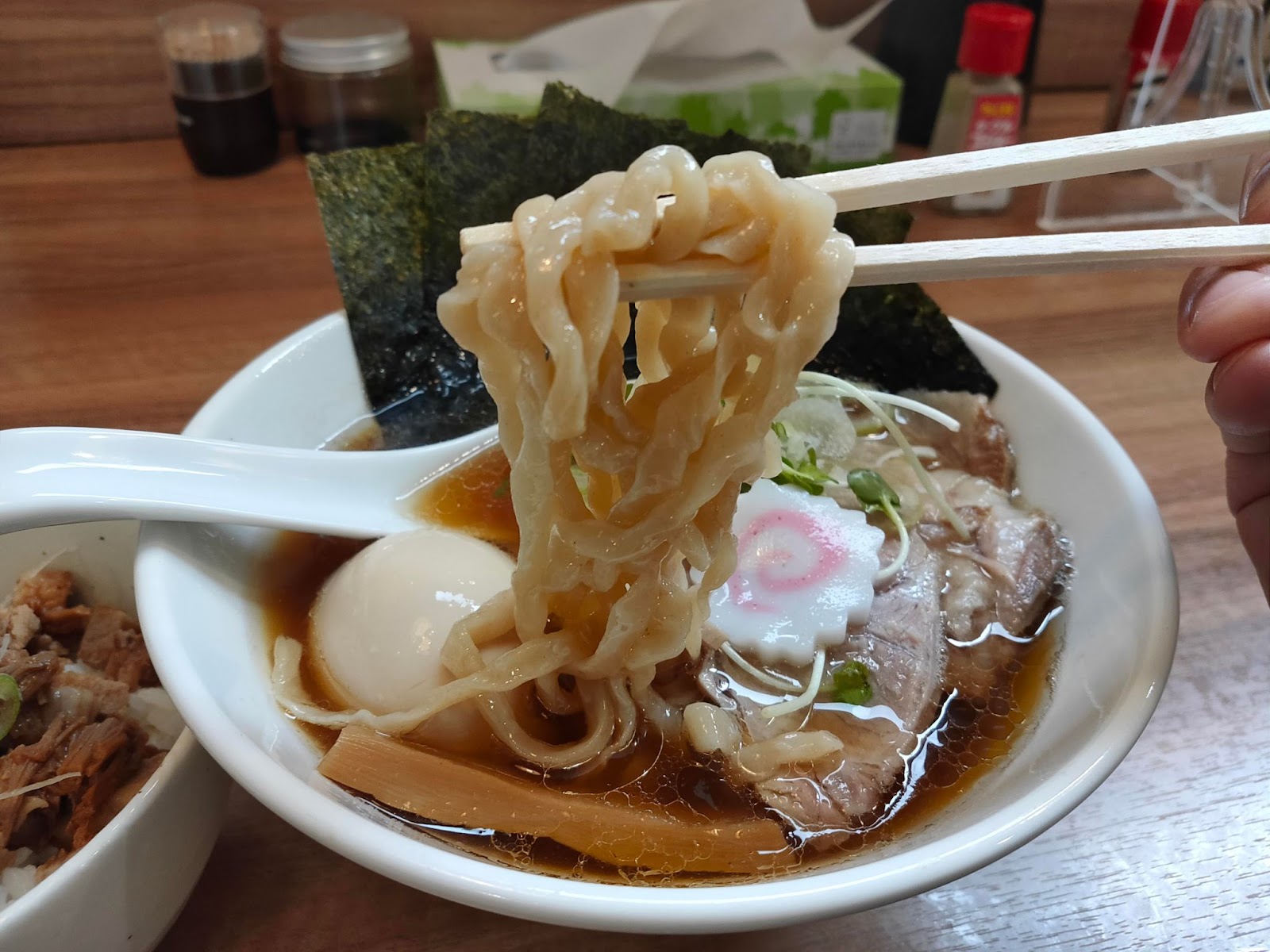 The noodles were curly and thick.

They make an excellent combination along with the soup.

You could feel the flavor of the niboshi (small dried sardines) well, and with its light taste, the bowl gets empty before you know it.

The chashu was juicy and had just the right amount of tenderness for easy eating. 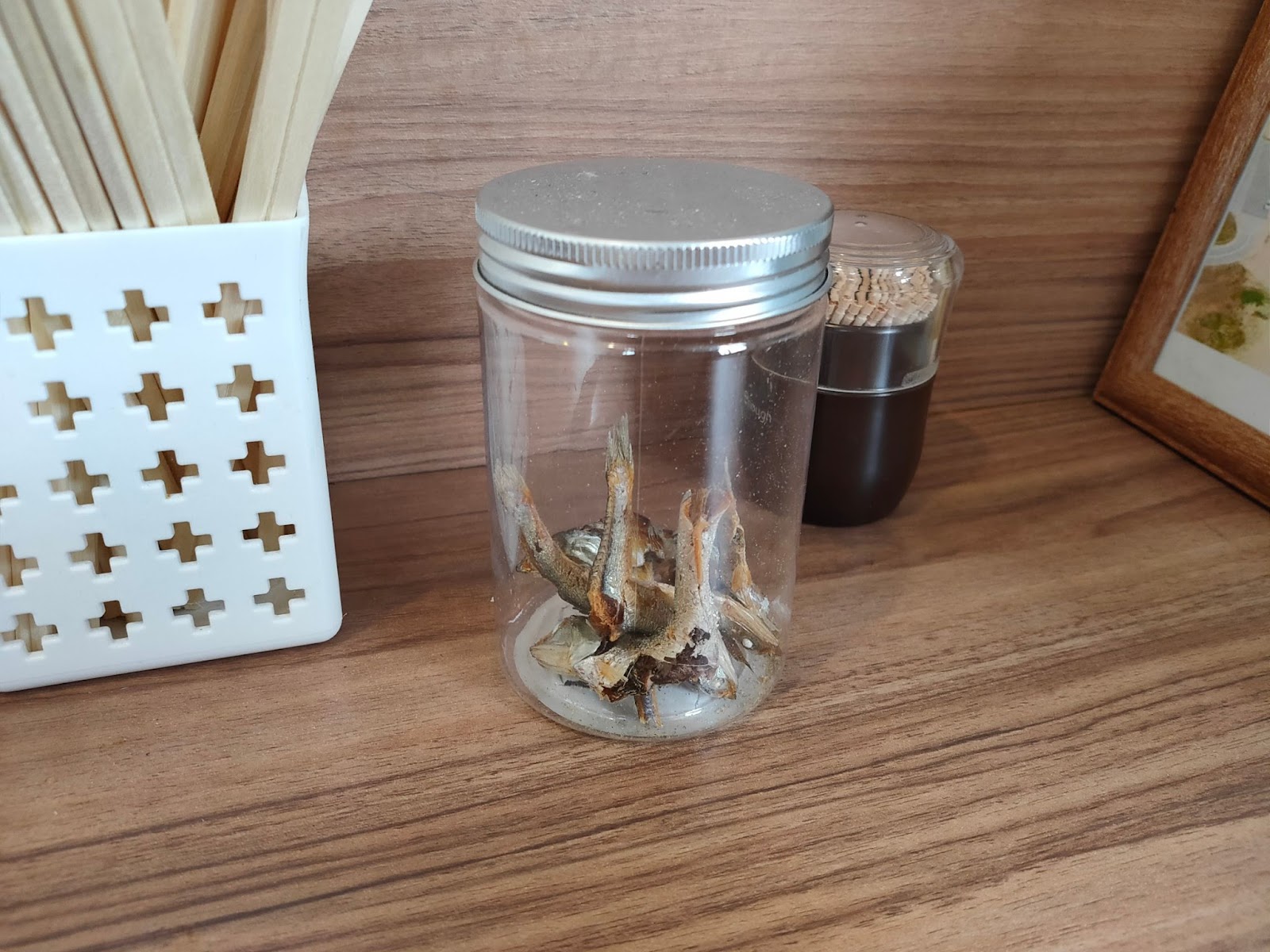 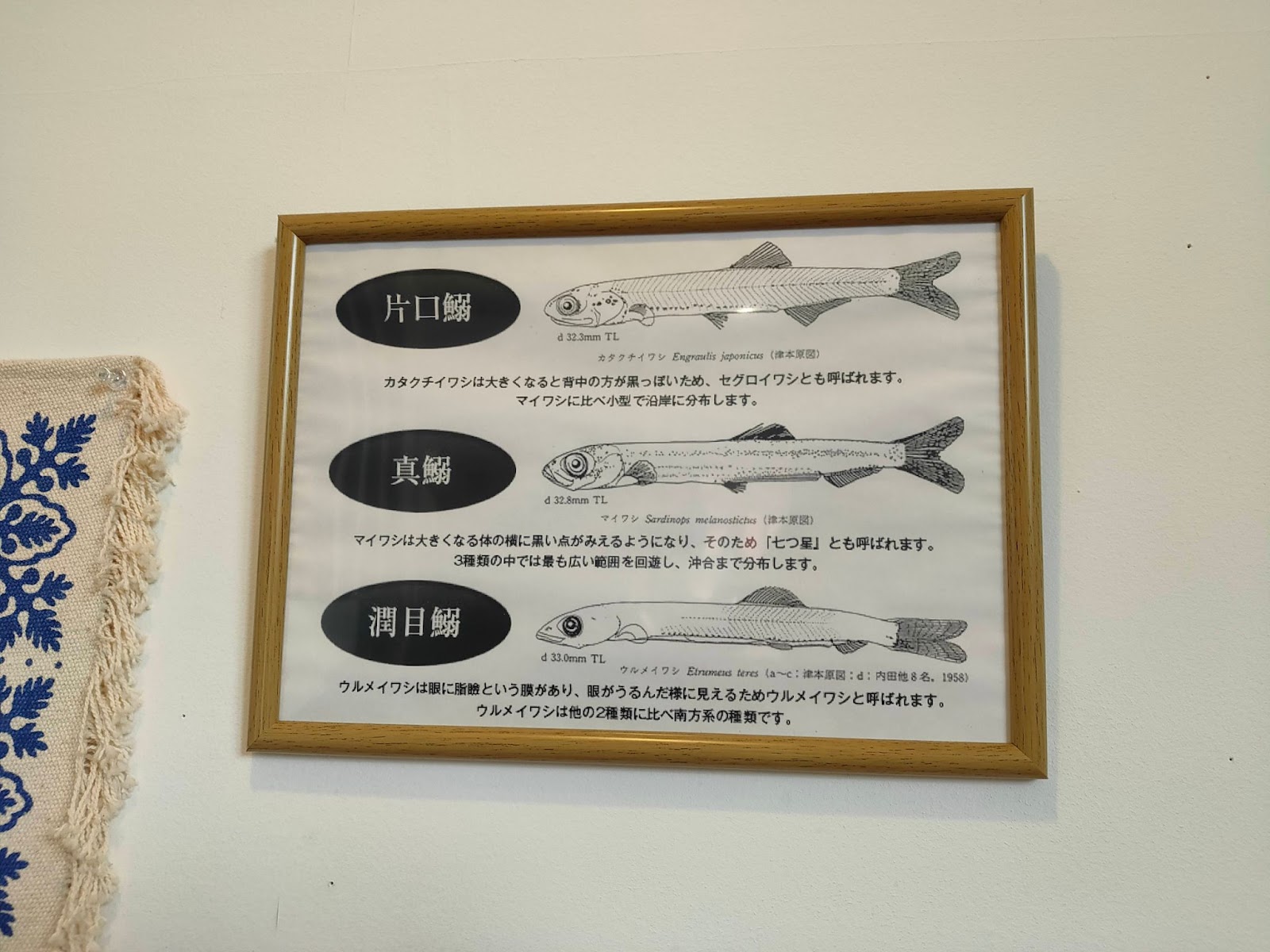 Everywhere you look, the restaurant is all about niboshi. True to their name of a niboshi-style ramen restaurant. 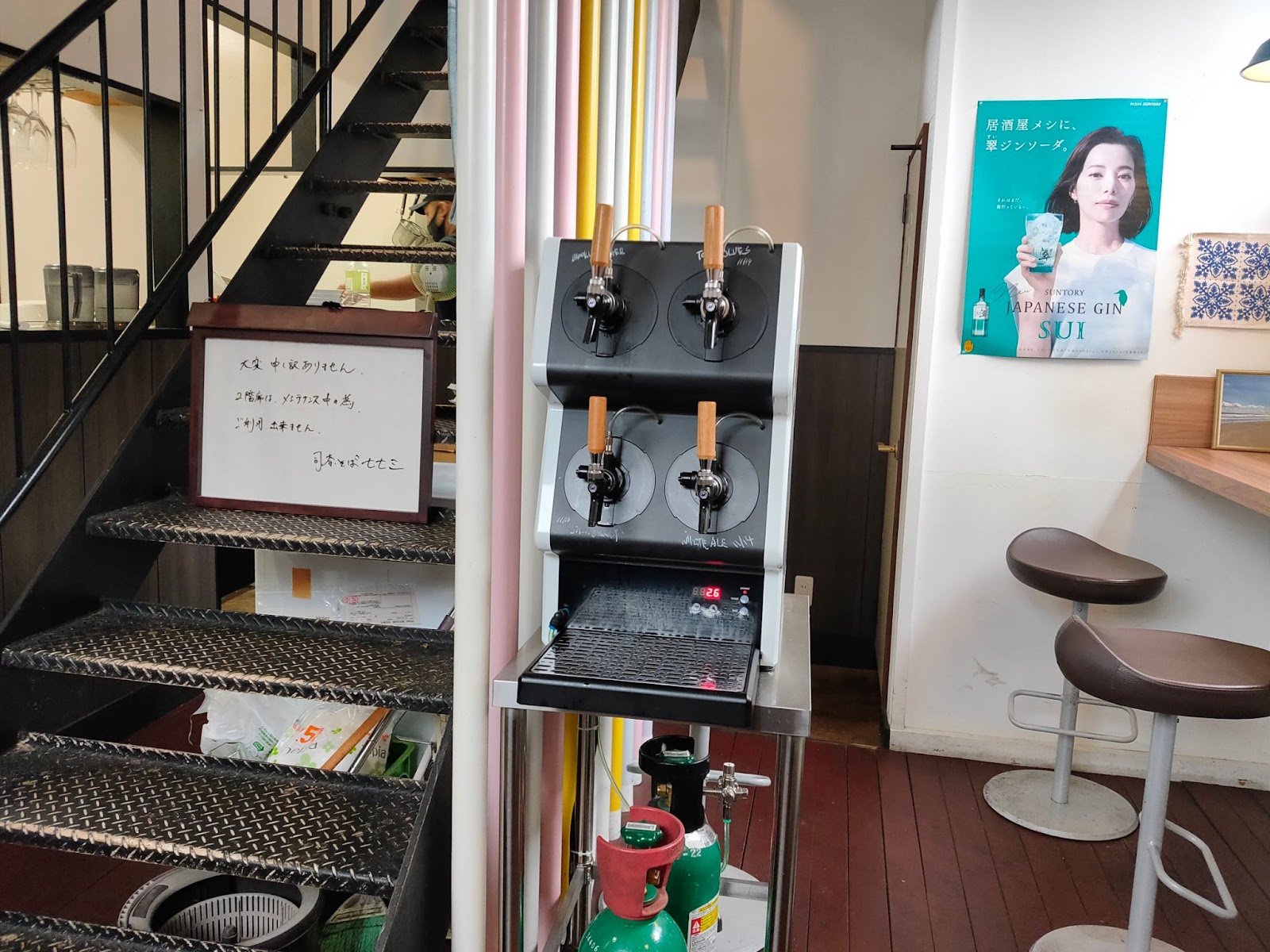 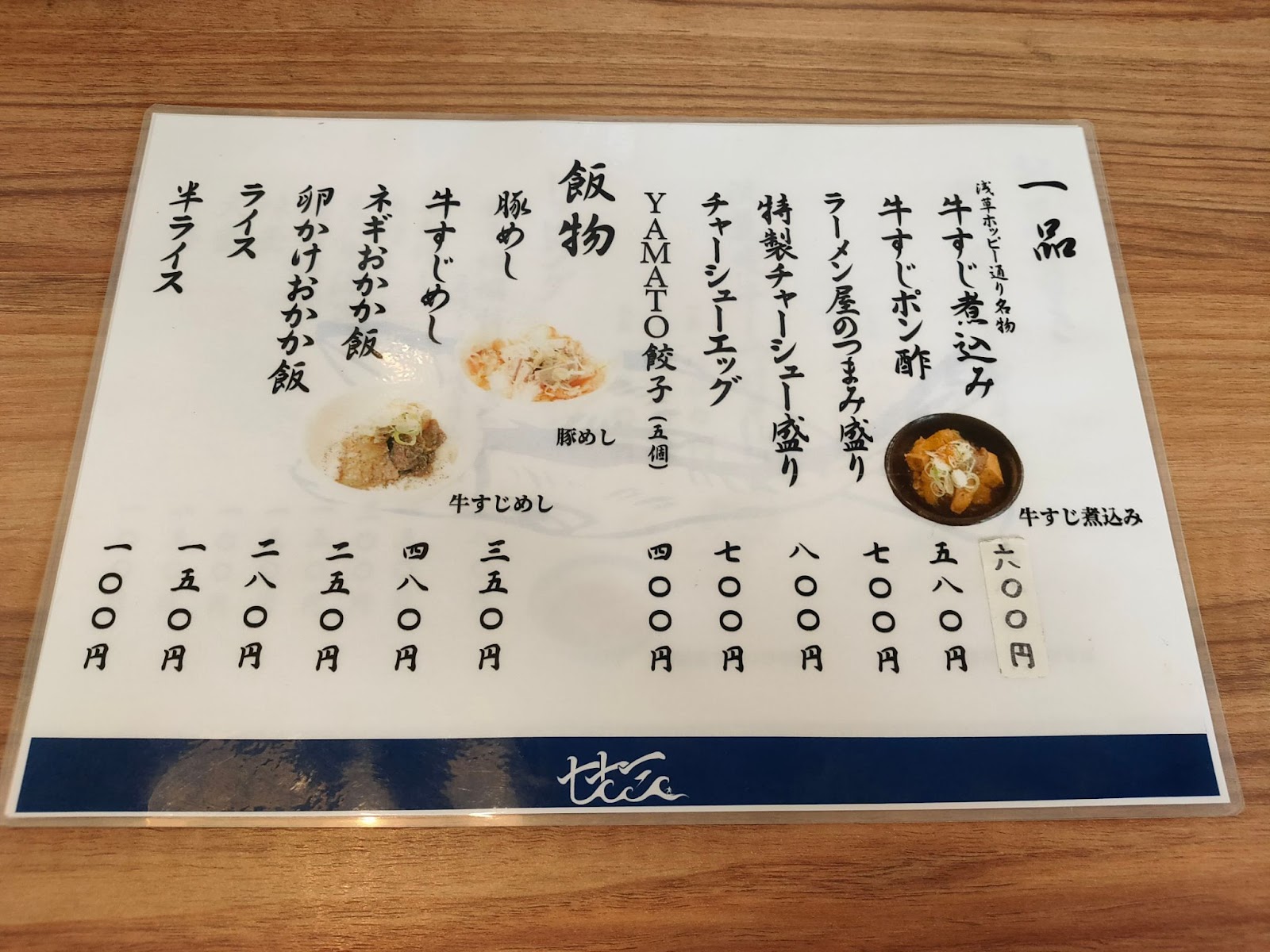 You can also order alcoholic drinks and nibbles here.

In particular, they have a wide selection of craft beers and dedicated beer server taps.

With their lightly seasoned ramen, the place seems to be a perfect match to conclude a night of drinking in Narita — an ideal place for an after-party or an after-after-party.

Upon searching, I found that their restaurant here in Narita is the main one, and they also have restaurants in Yotsukaido and Inagekaigan.

For this time, I selected lightly seasoned ramen restaurants, continuing from the last time where we introduced you to ones for thick broth ramen.

All these ramen restaurants were within walking distance of Narita Station — and there are still tons of other restaurants.

I highly recommend you to find *your* favorite bowl of ramen!