When Narita is mentioned, for many people the airport and Naritasan Shinshoji Temple will come to mind. However, Narita's foodie scene is also one of its charms.

In this article, I would like to highlight ramen restaurants that are scattered around Narita and tell you about their recommended thick broth ramen.

Although it may not look like it, Narita is actually home to many ramen restaurants.

Even within walking distance from Narita Station, there are so many restaurants that it is difficult to choose one, so I believe it would be fair to label Narita as a ramen hotspot.

Because it would be impossible to tell you about all restaurants, I would like to narrow it down to thick broth ramen and to highlight ramen restaurants around Narita stations that specialize in it. 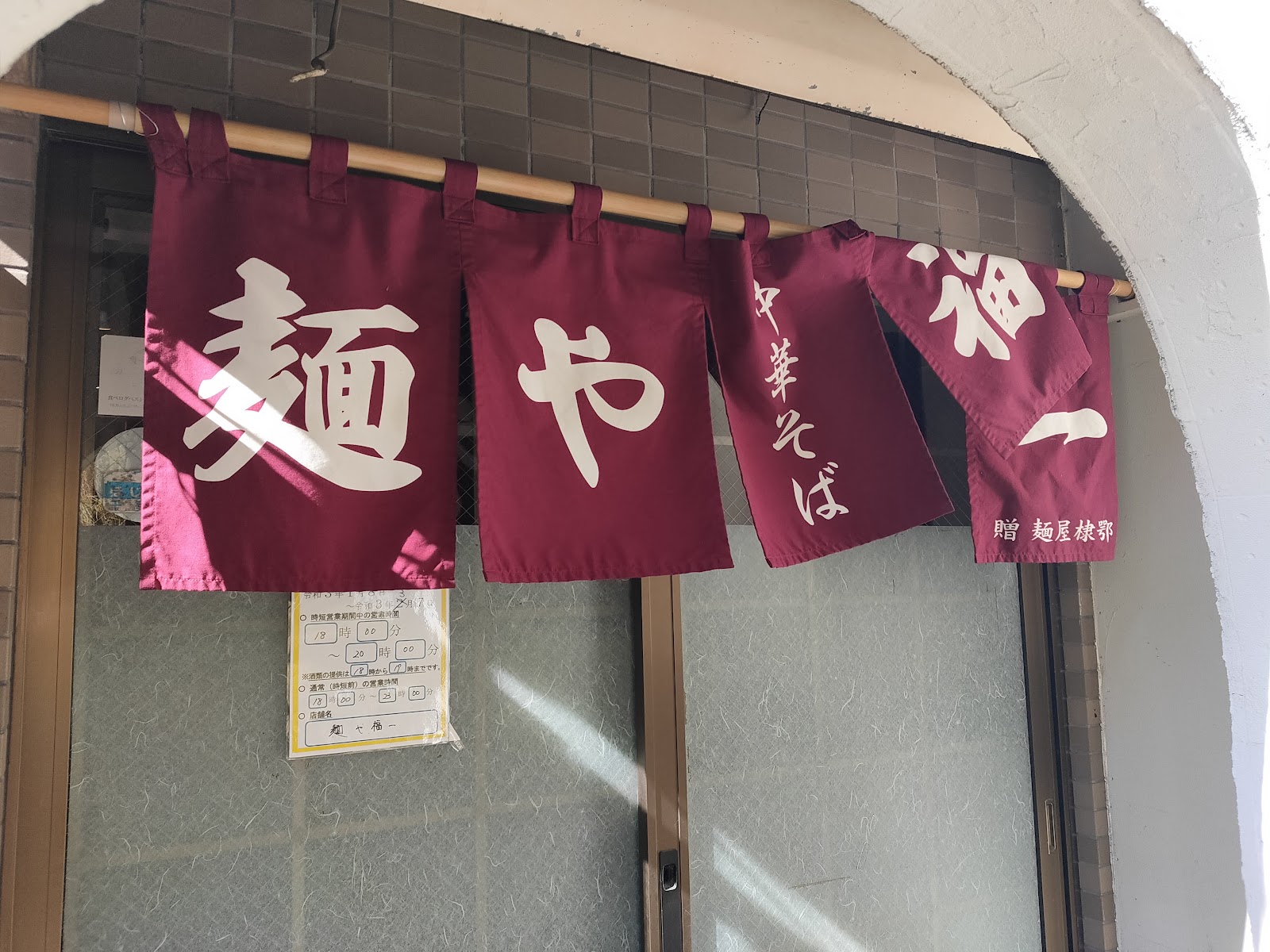 A six-minute walk from JR Narita Station. If you continue along the narrow road there, you can spot the restaurant sign by the railroad tracks.

It was major news in the area, as it was a famous restaurant that was deep-rooted in the community for around 20 years.

Following that, fans of the restaurant announced that they wanted it to reopen, so they started a crowdfunding campaign. The funding goal was reached, and the restaurant where the son originally sold Chinese food was rebuilt and revived (as of the time of writing, 2020). 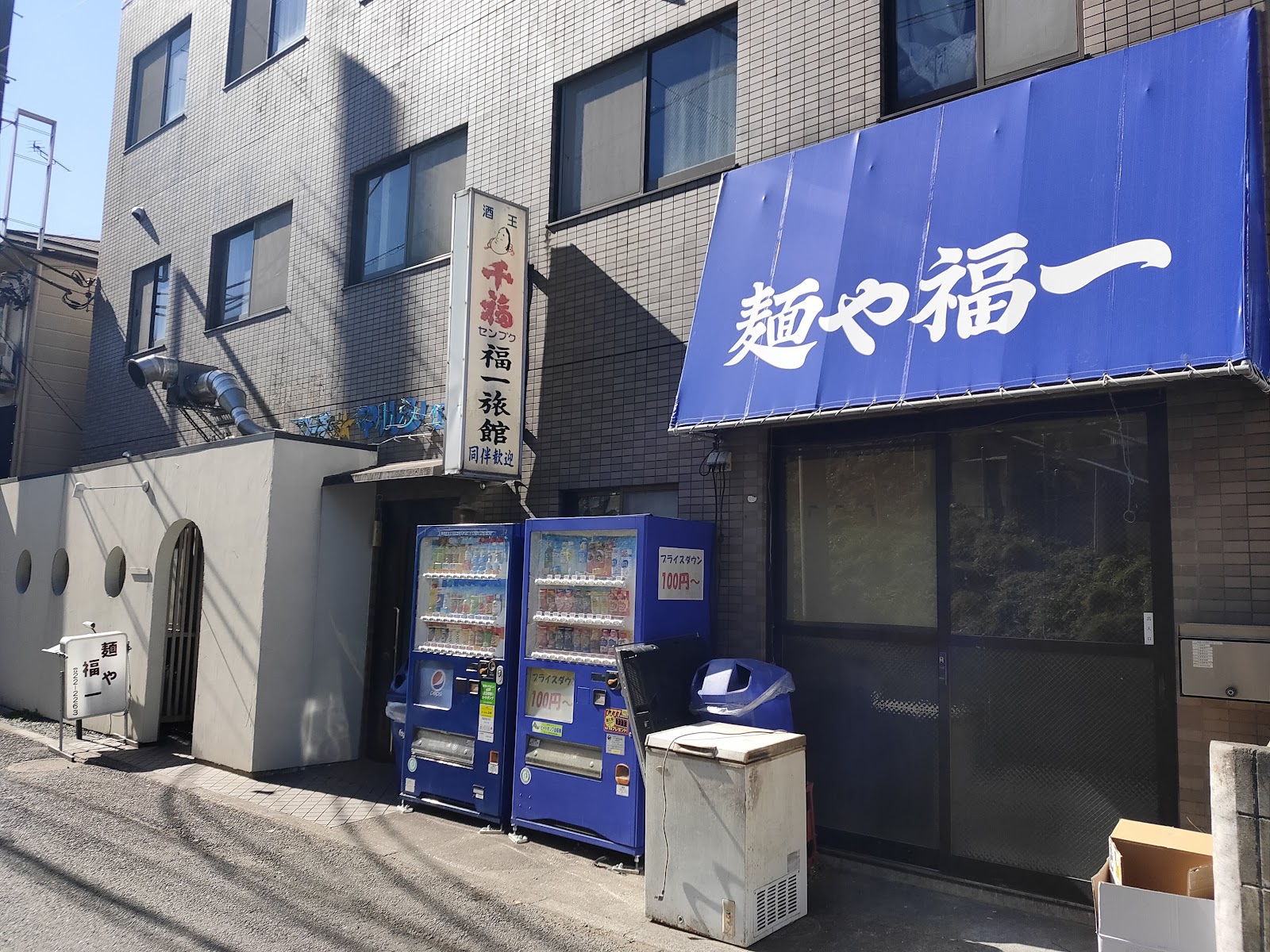 (The restaurant that burned down in front was the old Ramen-ya Fukuichi. It currently operates where the signboard behind it is.)

It was early in the afternoon during the Covid-19 state of emergency when I entered the restaurant.

There are ten counter seats and table seating for four people, and at the time of my visit, all seats were occupied. 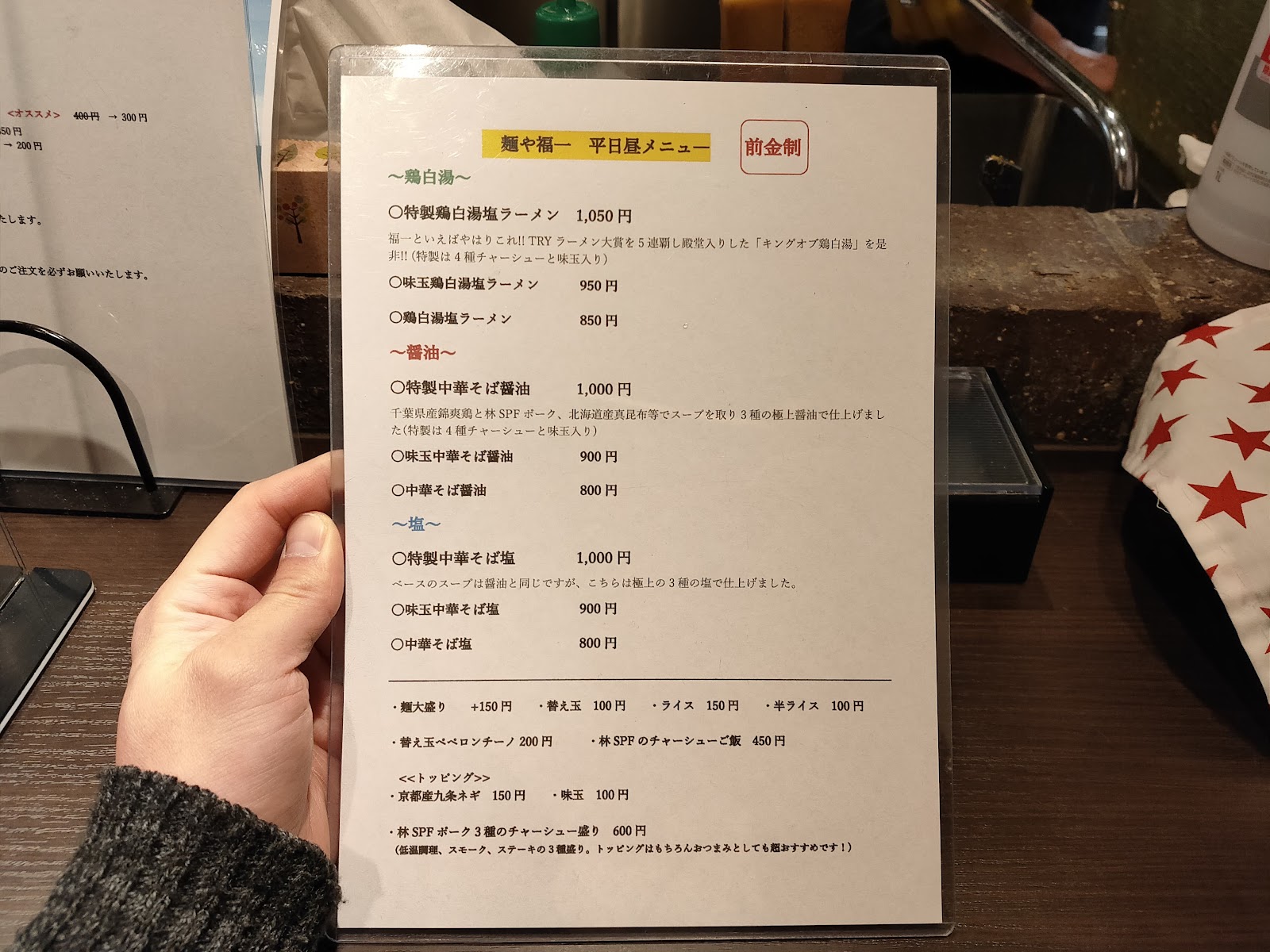 The restaurant has an ordering system where you order from your seat and pay in advance.

Seeing the smooth-spoken and handsome son serving customers and cooking at the counter is an eye-catching sight. 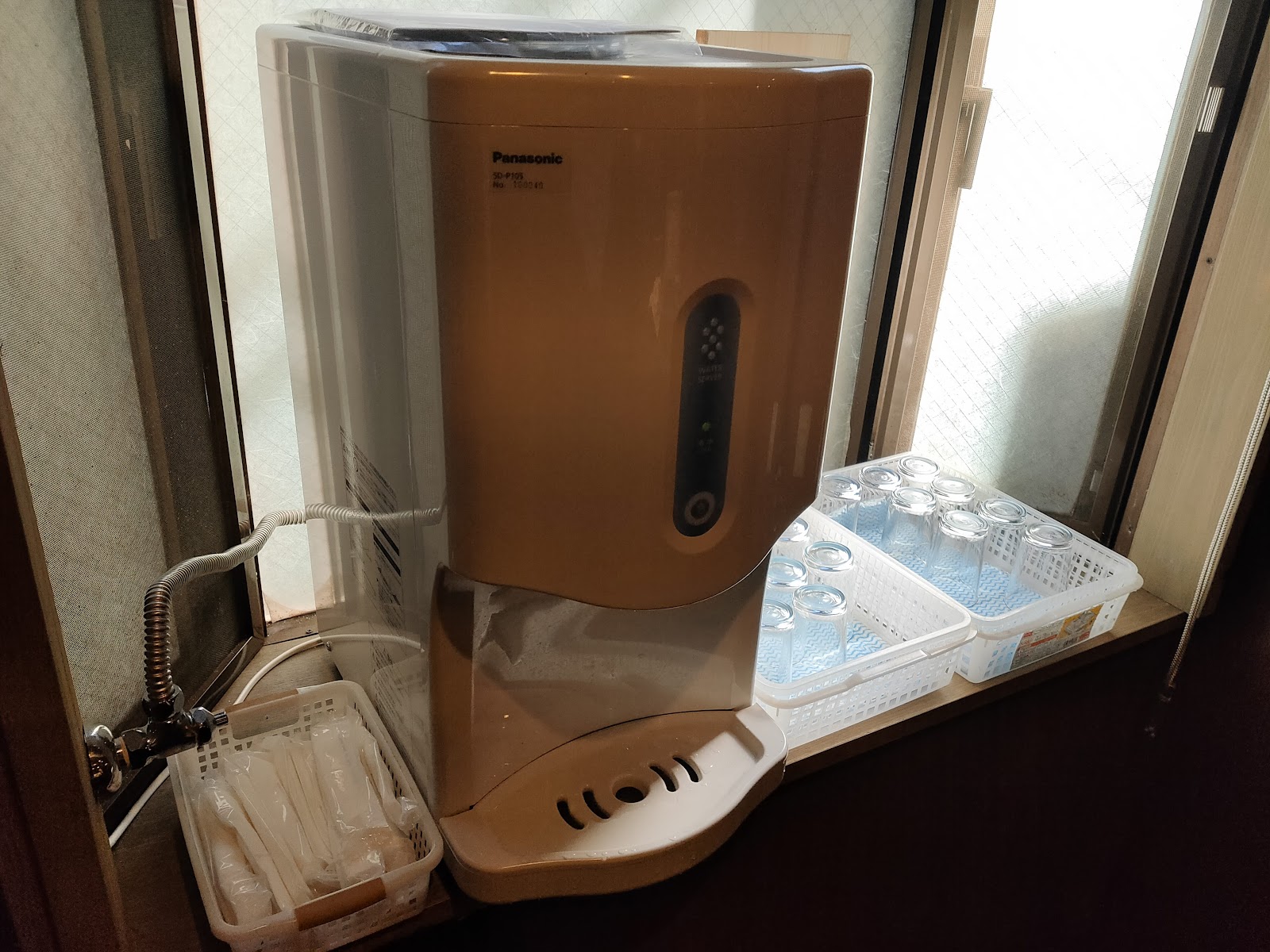 The wet towels and water are self-service. You can get in the corner by the entrance. 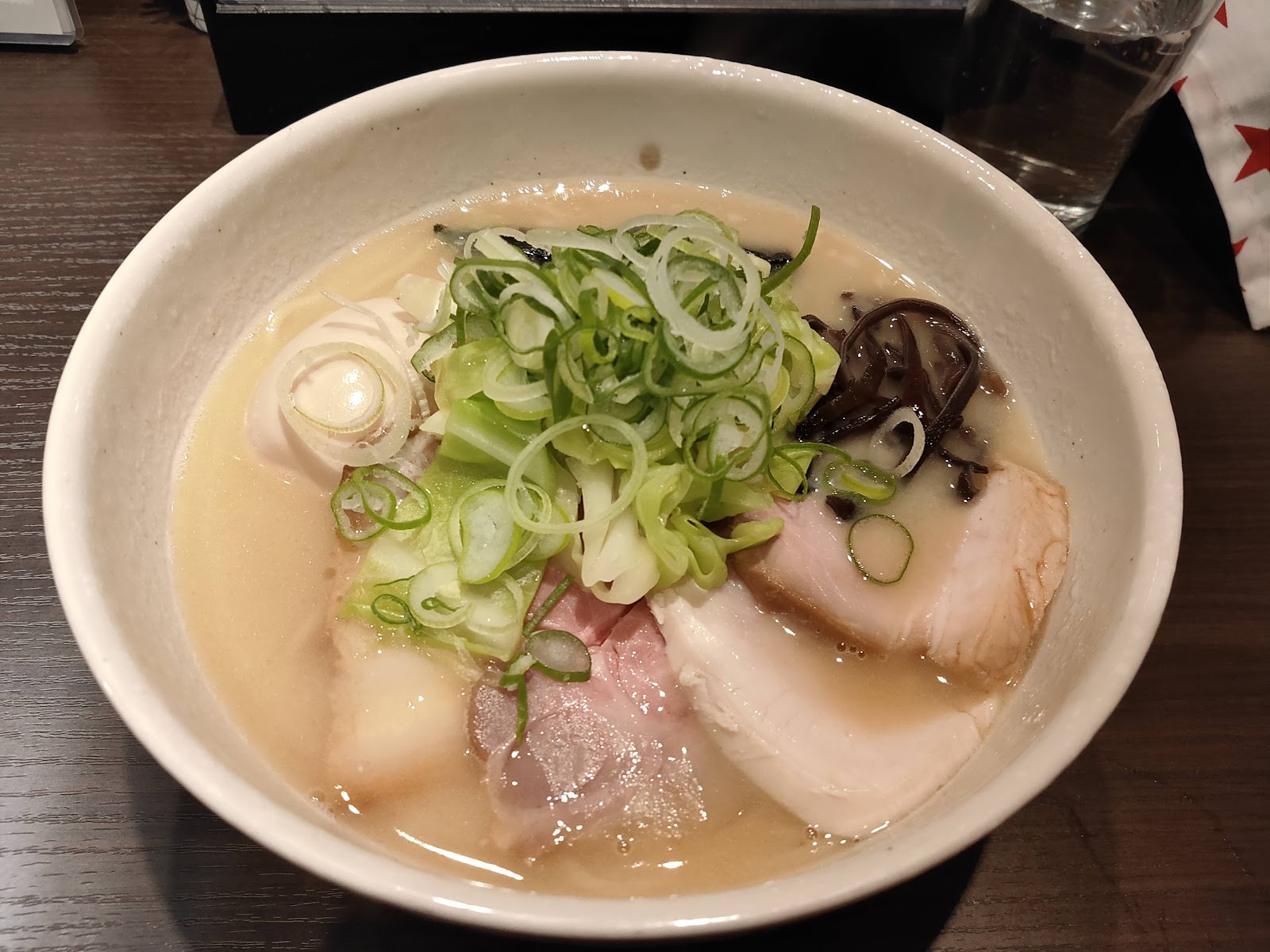 It's a cloudy mouth-watering broth that can only make you utter, "Now *that's* what I call a salted hot water chicken ramen!" 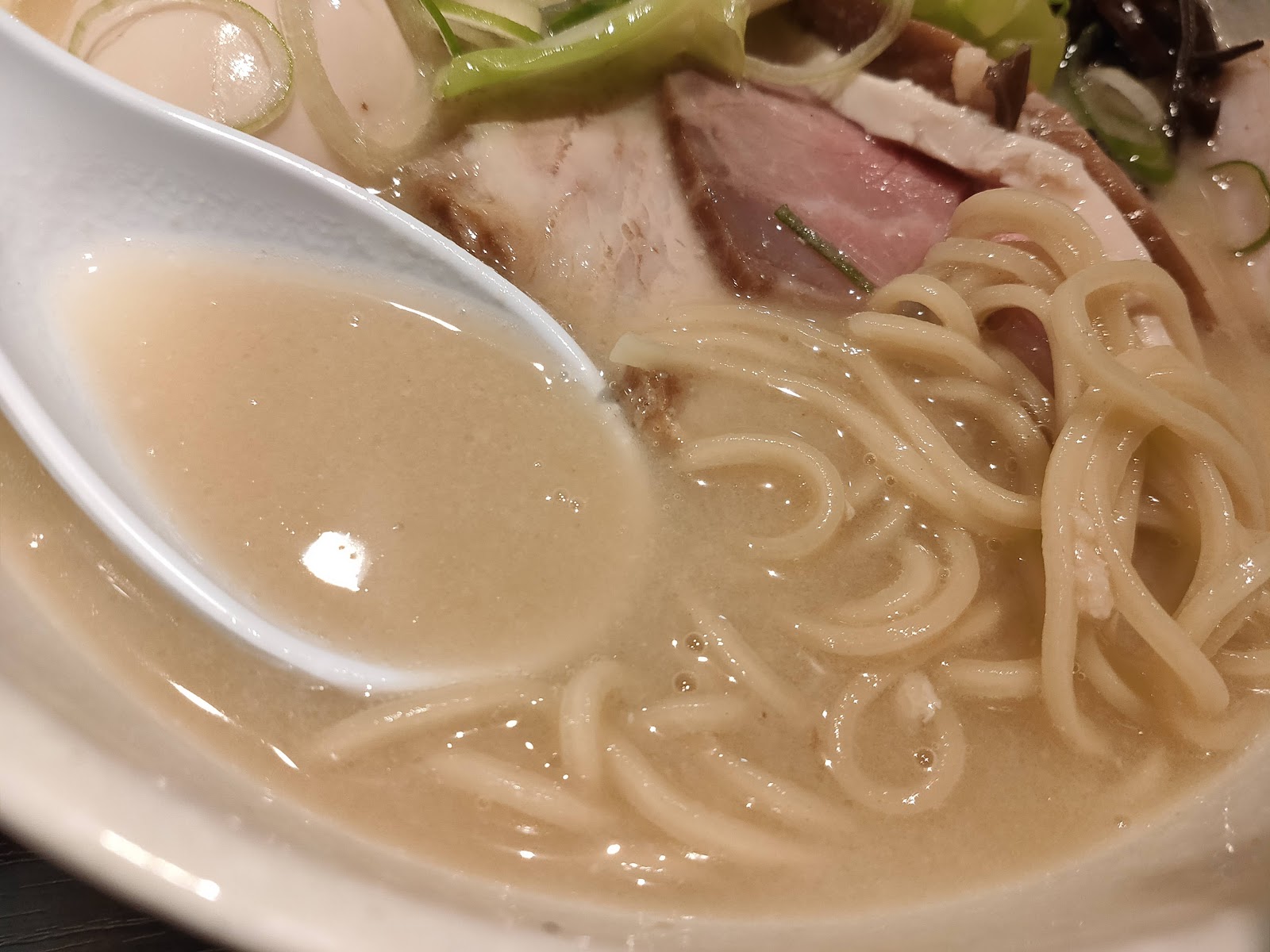 The thick broth is definitely rich, with a mysterious feel to it. I ended up eating all of it until the last drop.

The ramen is mysterious because although the broth is thick, it goes down easily.

If you're worn out from traveling, you may want to avoid eating ramen that's hard on the stomach. However, you should be able to eat Fukuichi's ramen. 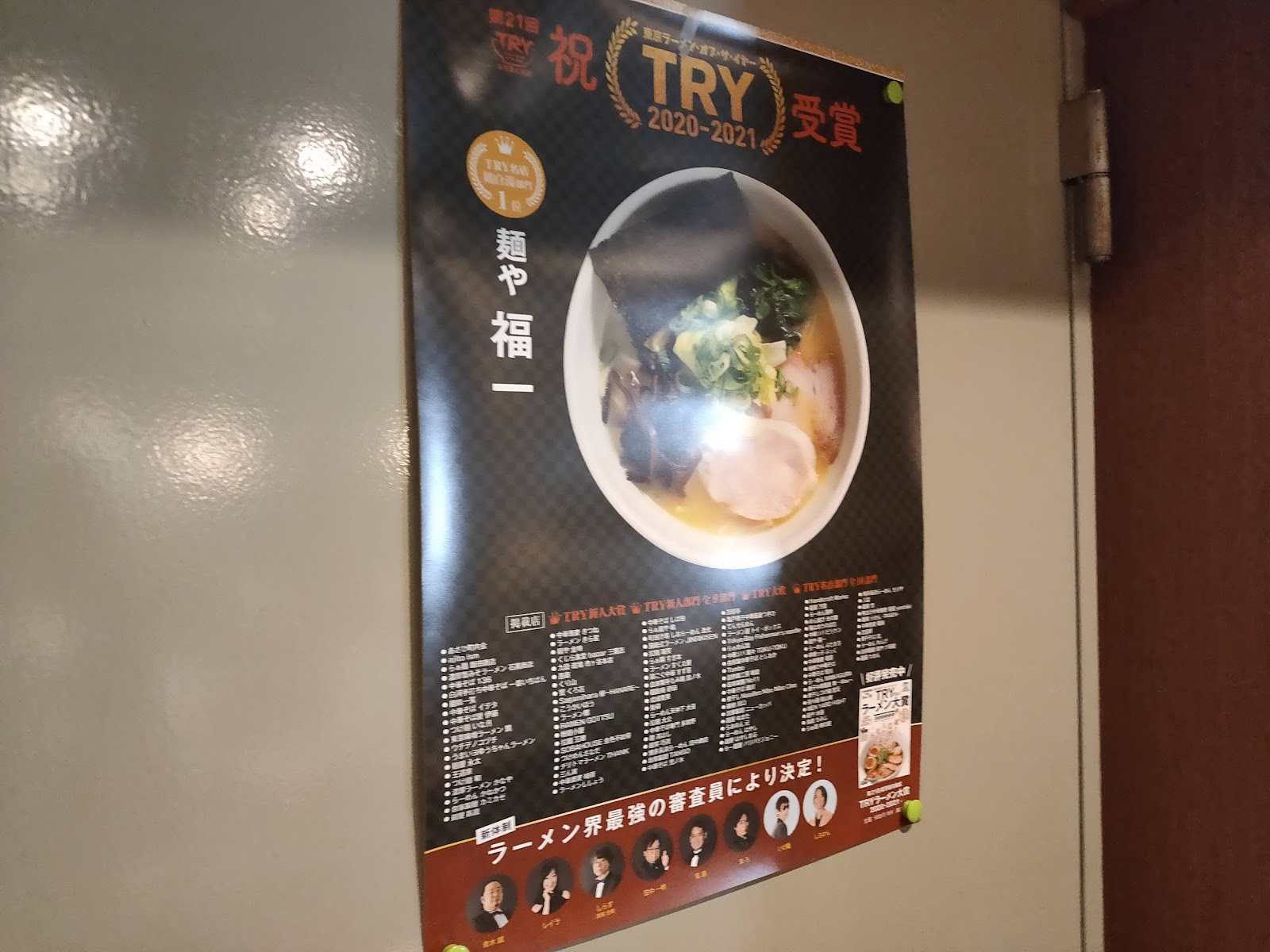 Fukuichi has been winning a string of first prizes at ramen competitions, and apparently, their ramen has even been made into an instant ramen. 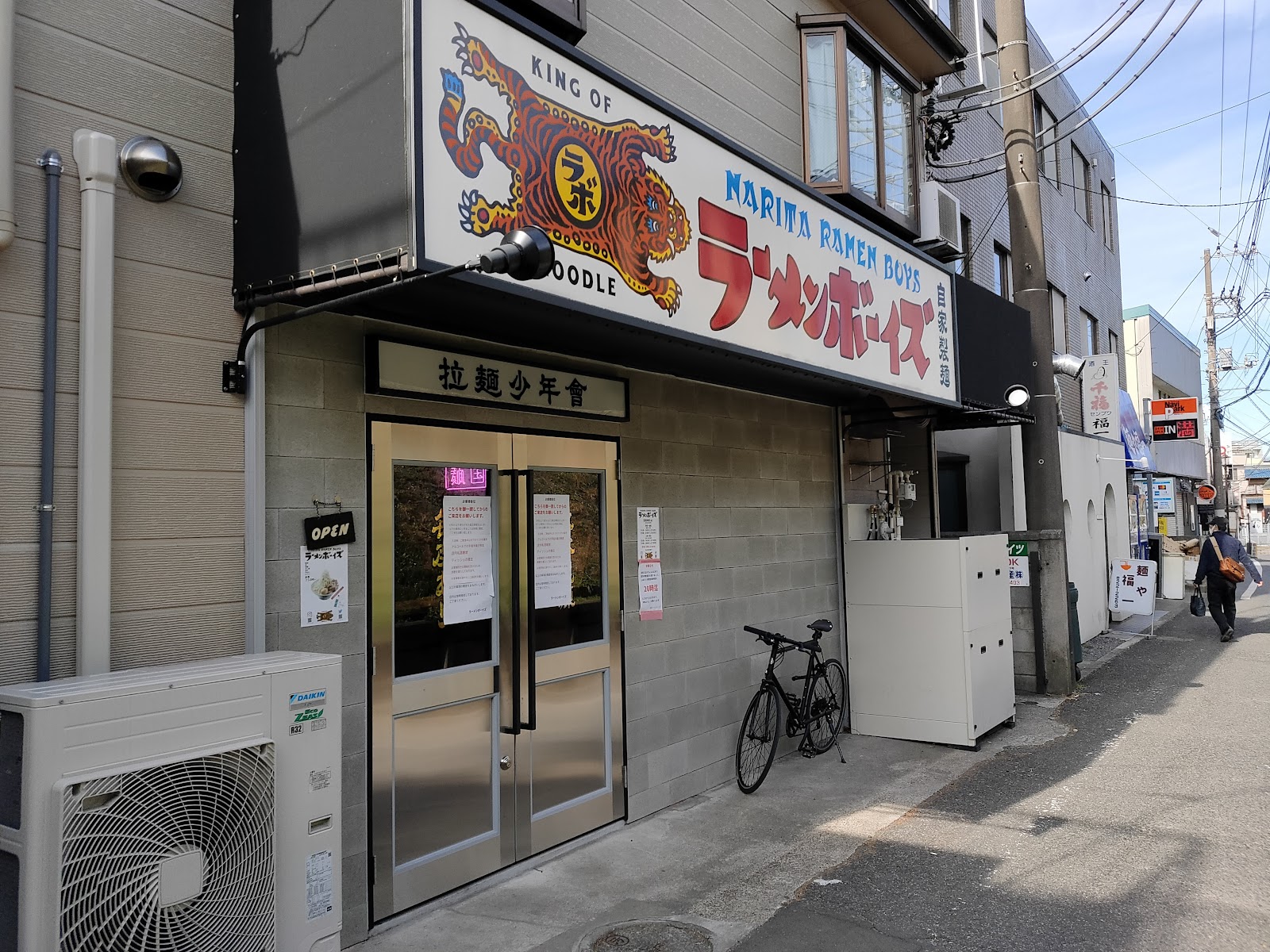 This restaurant is also six minutes on foot from JR Narita Station, and is in the same line of restaurants as Men-ya Fukuichi which I first told you about.

It's a new restaurant that moved from Shinagawa in Tokyo and opened its doors sometime in the summer of 2020.

The ramen served by this restaurant finds its roots in "Jiro-style" ramen. It is modeled after the ramen of Ramen Jiro in Tokyo, which is characterized by vegetables that are piled onto the noodles in such a large amount that they completely cover them, and being able to choose toppings from garlic and other condiments.

Although I came into the restaurant on a weekday afternoon during the state of emergency, it was almost fully packed.

It was clear that the clientele of the restaurant largely consisted of young men. 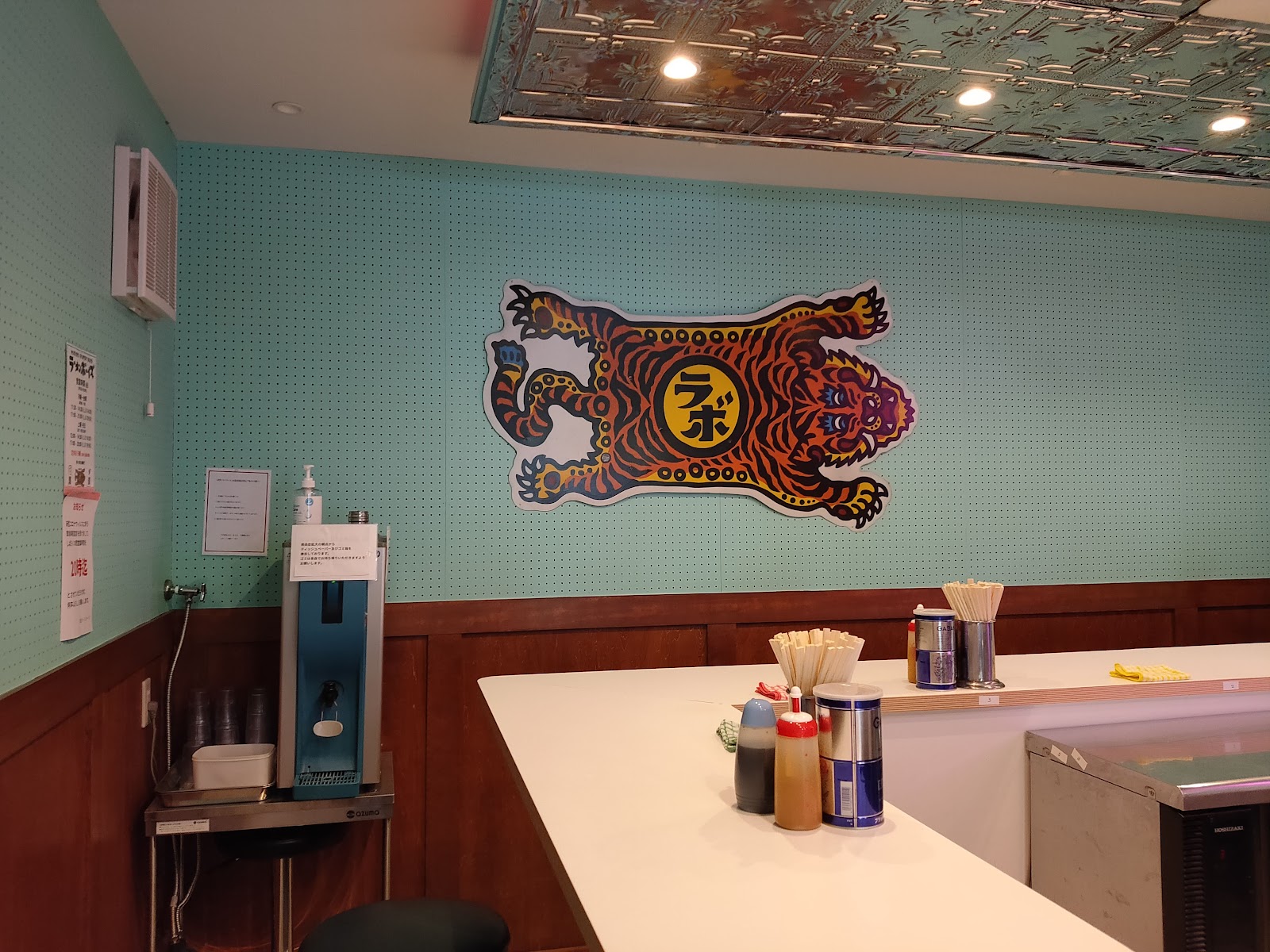 The interior of the restaurant is also unique. There are all kinds of striking decorations that catch the eye.

There is only counter seating, and underneath the seats, there are hooks for hanging bags from. 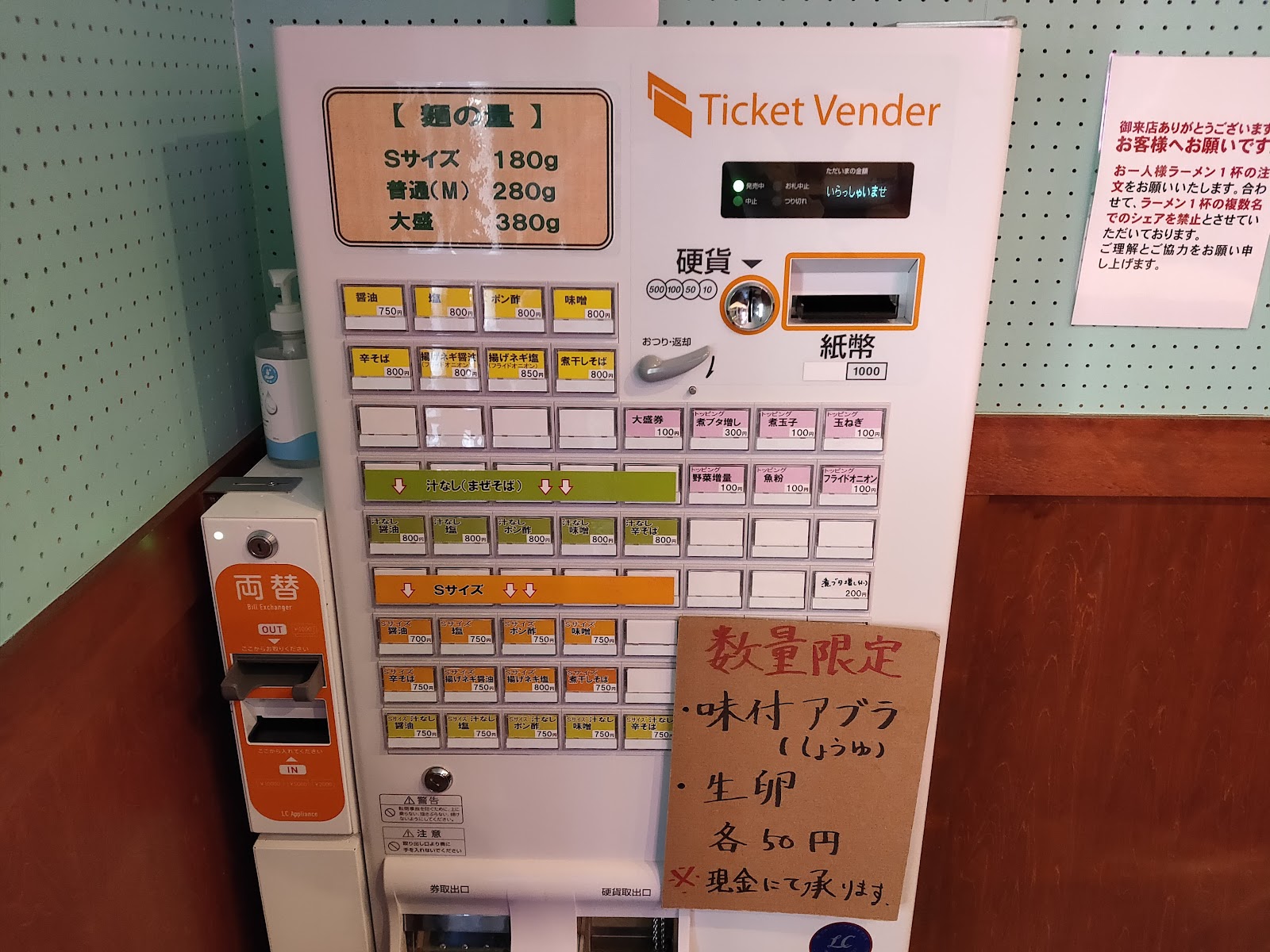 Before taking a seat, you need to buy a meal ticket from the vending machine.

When you sit down, a waiter will ask you if you want to add garlic to your food, so you should decide in advance what you'd like.

I ordered a regular-sized soy sauce ramen (280g) topped with a boiled egg.

After I handed my meal ticket over, I became engrossed by the restaurant interior decorations. I was surprised when my order was brought to the table in just a matter of minutes. 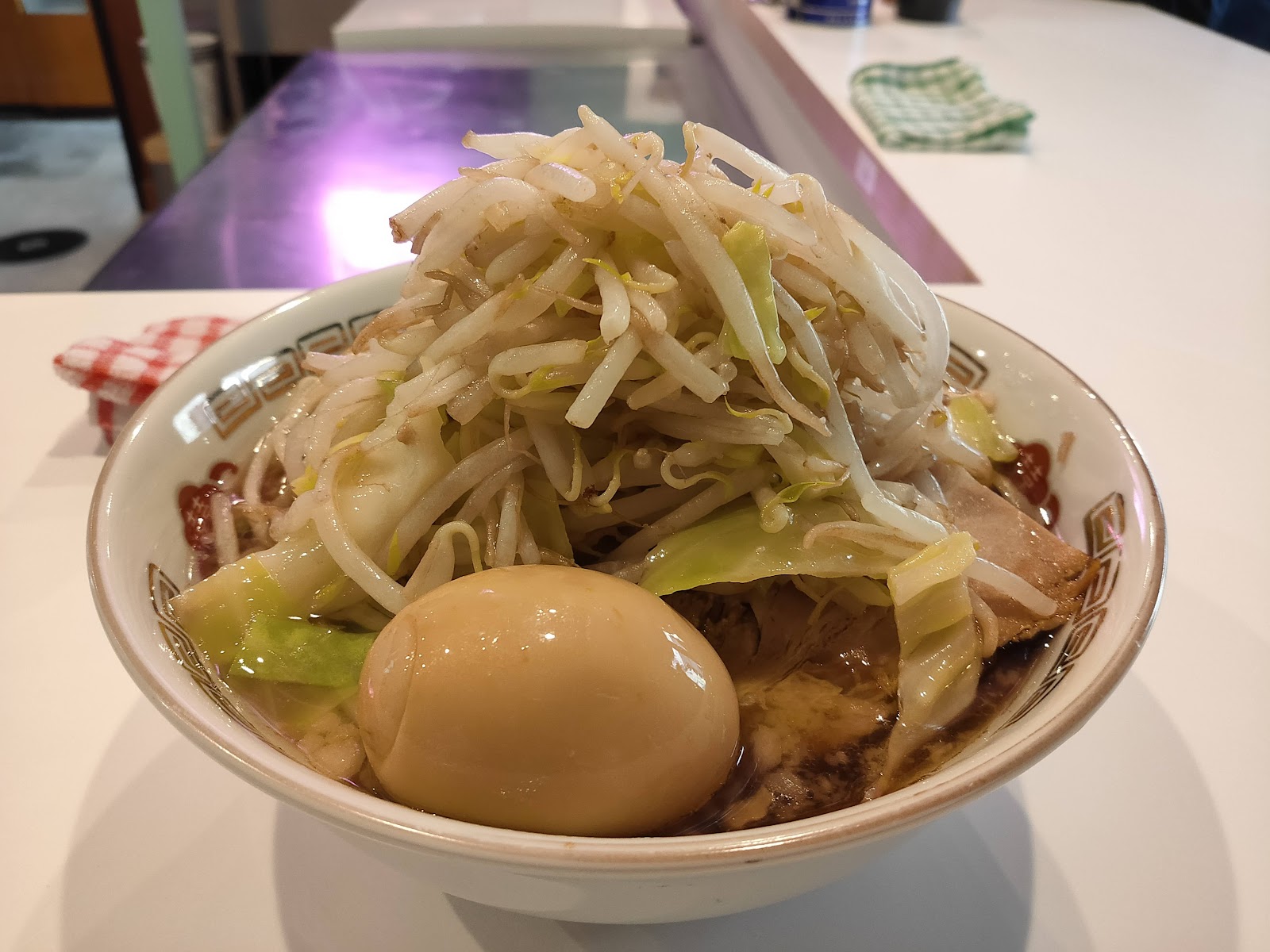 This is undoubtedly a Jiro-style heap of vegetables.

I reconfirmed that the noodles couldn't be reached unless the vegetables were dealt with first. 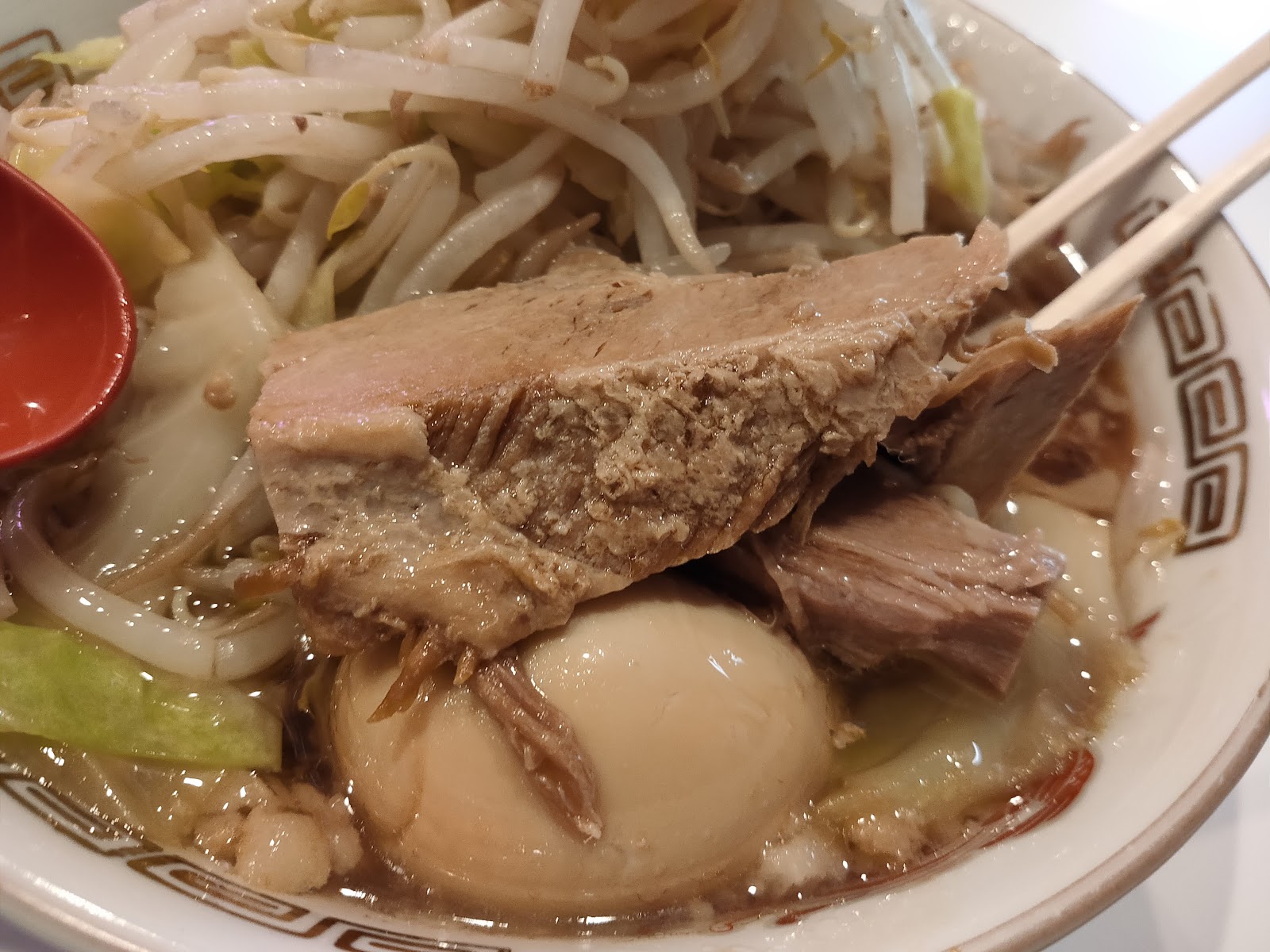 After I finished the vegetables, thickly sliced pork was waiting for me, with the very thick noodles in their place of honor underneath it.

Compared to Ramen Jiro, the flavor of the ramen felt quite uncomplicated, and because the oil and the flavorings weren't as heavy as I'd expected, I could eat it without ever feeling that I'd had enough. 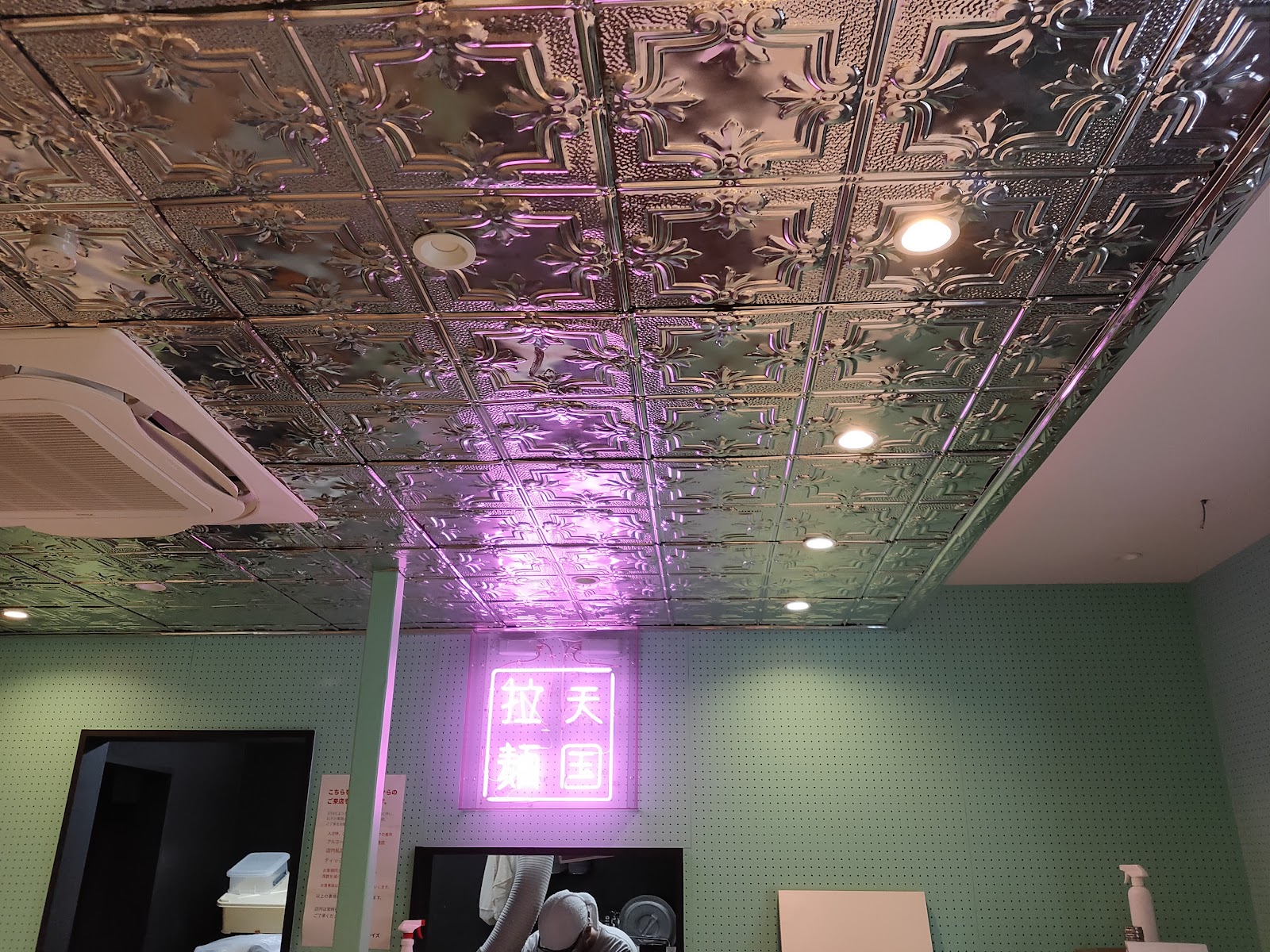 The rock background music combined with the sparkling decorations create a unique atmosphere. 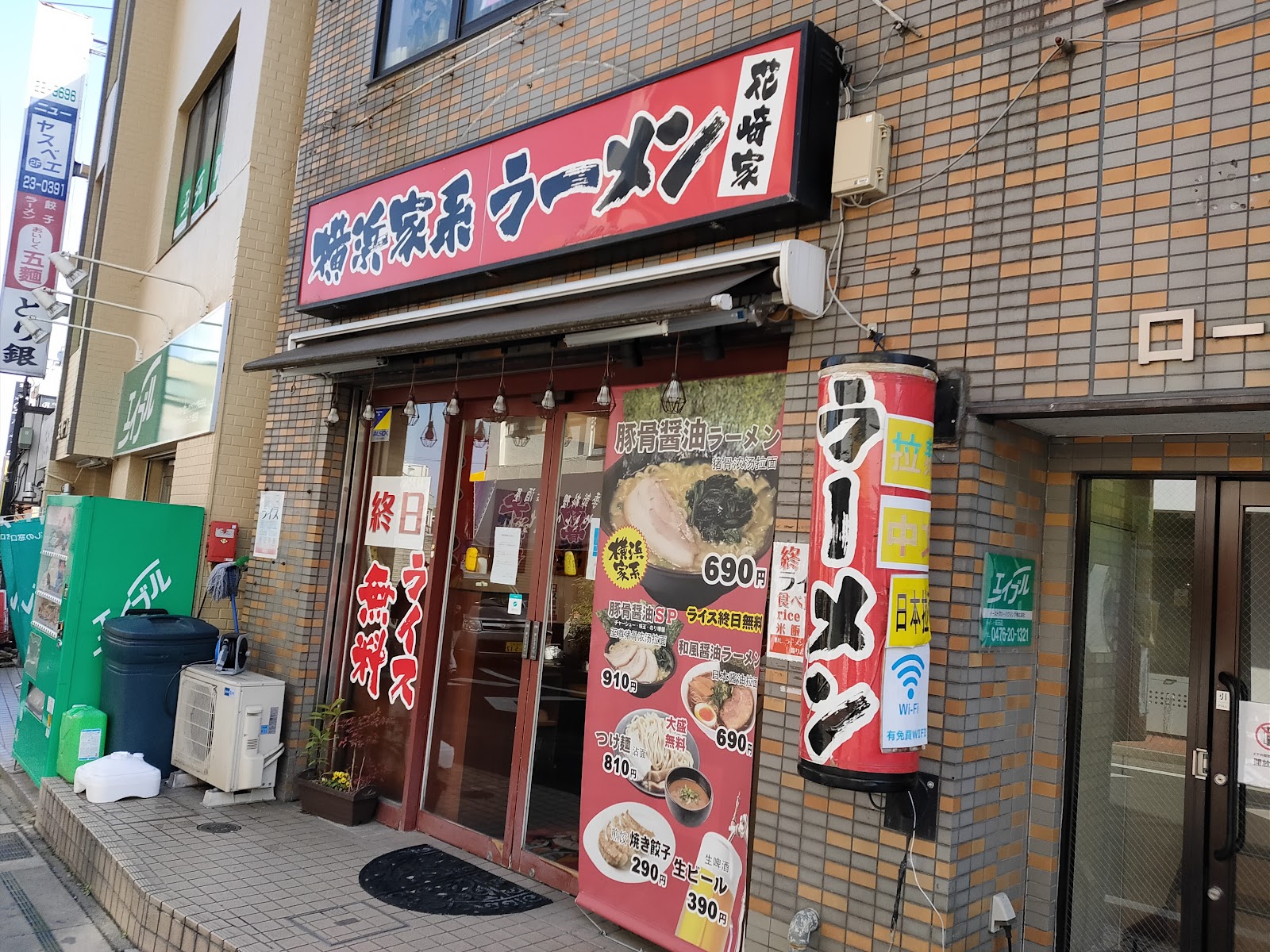 So-called "Iekei" ramen is a ramen that originated in Yoshimuraya in Yokohama. Some of its characteristics are being able to select the strength of the flavoring and the amount of oil used, and that it is eaten with rice.

This ramen restaurant is also especially popular with young men. 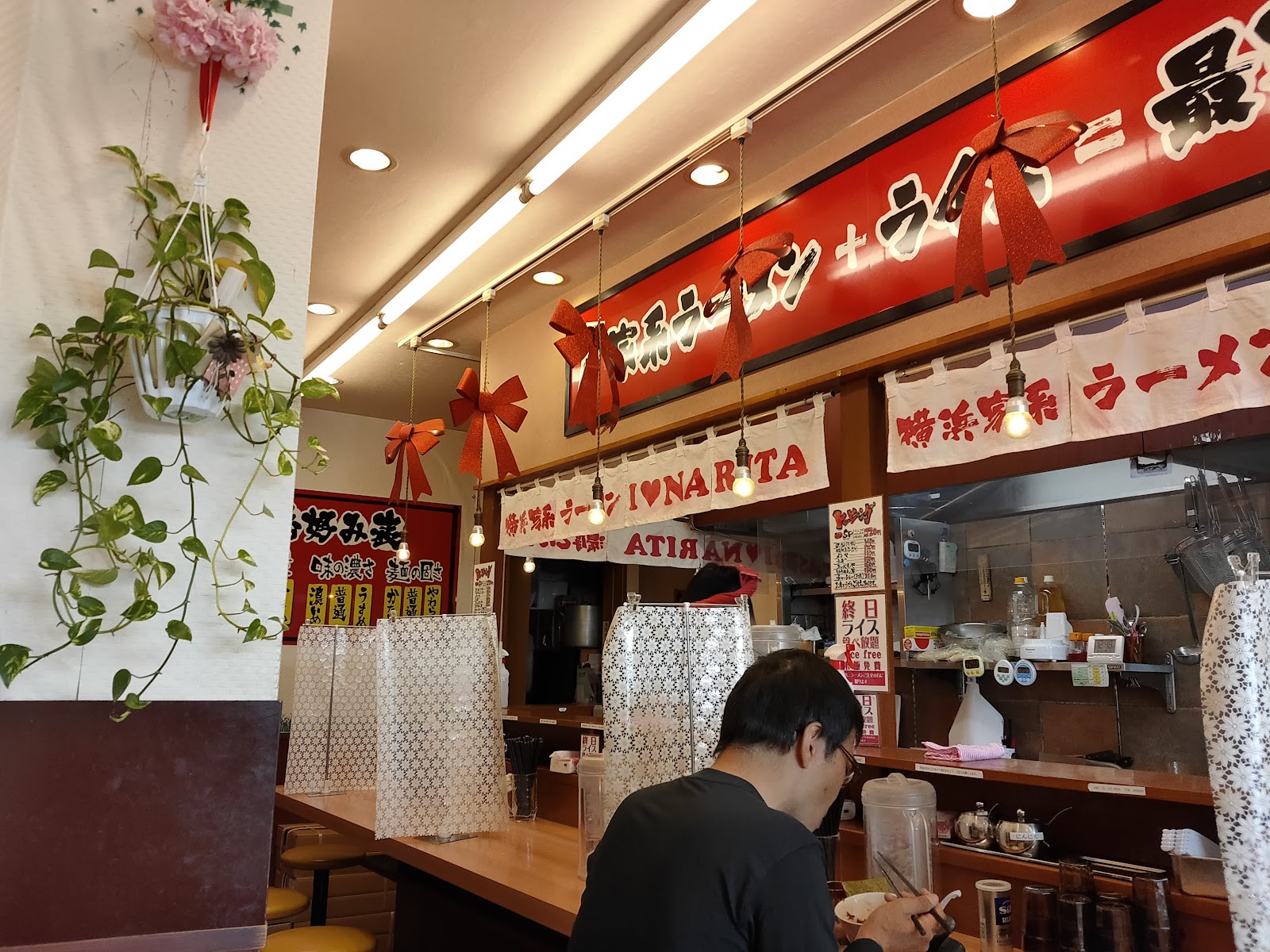 There is mainly counter seating. Screens have firmly been attached to it and Covid-19 countermeasures are also in place.

Because I visited after lunchtime, there were around two other guests. 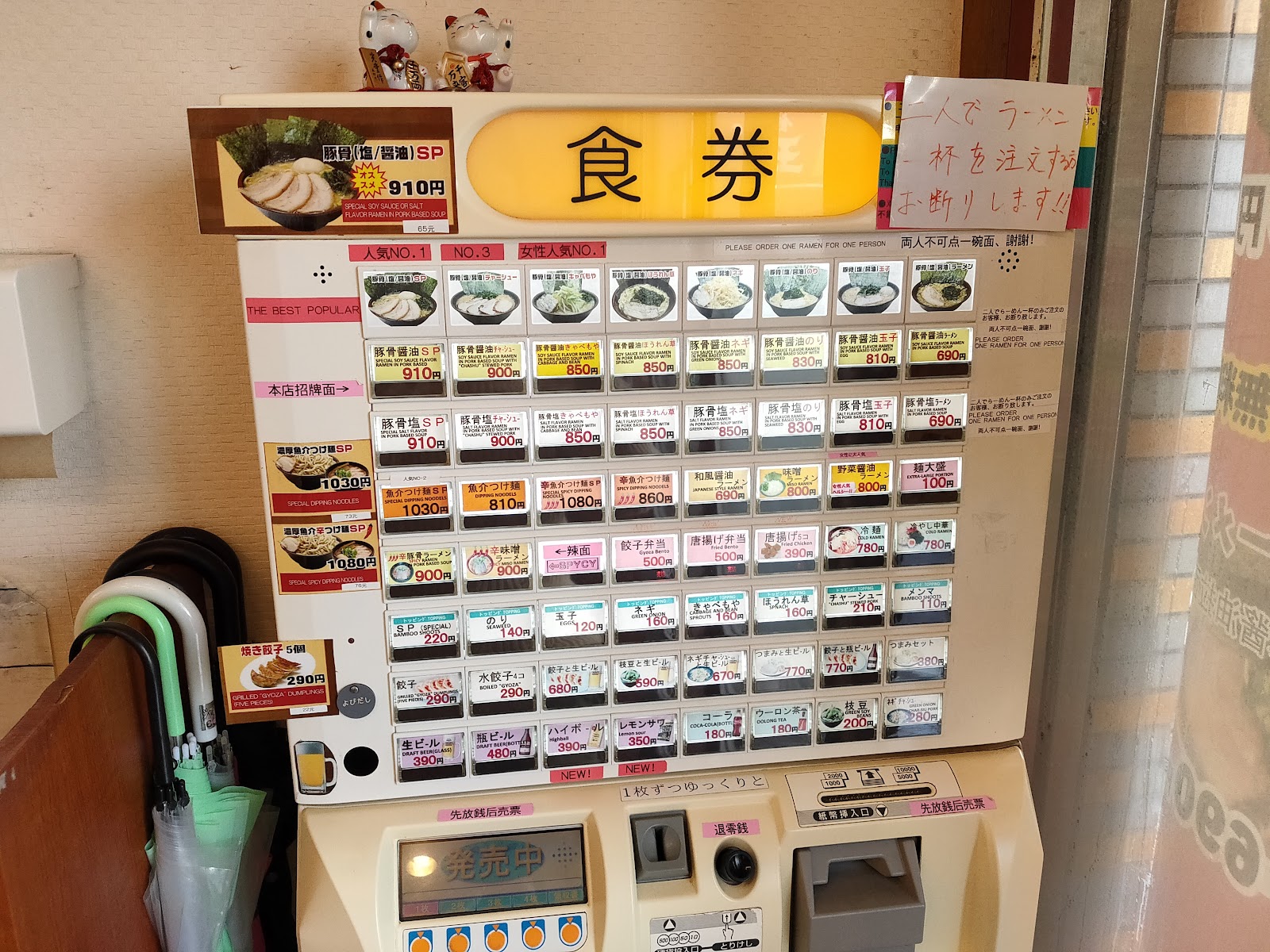 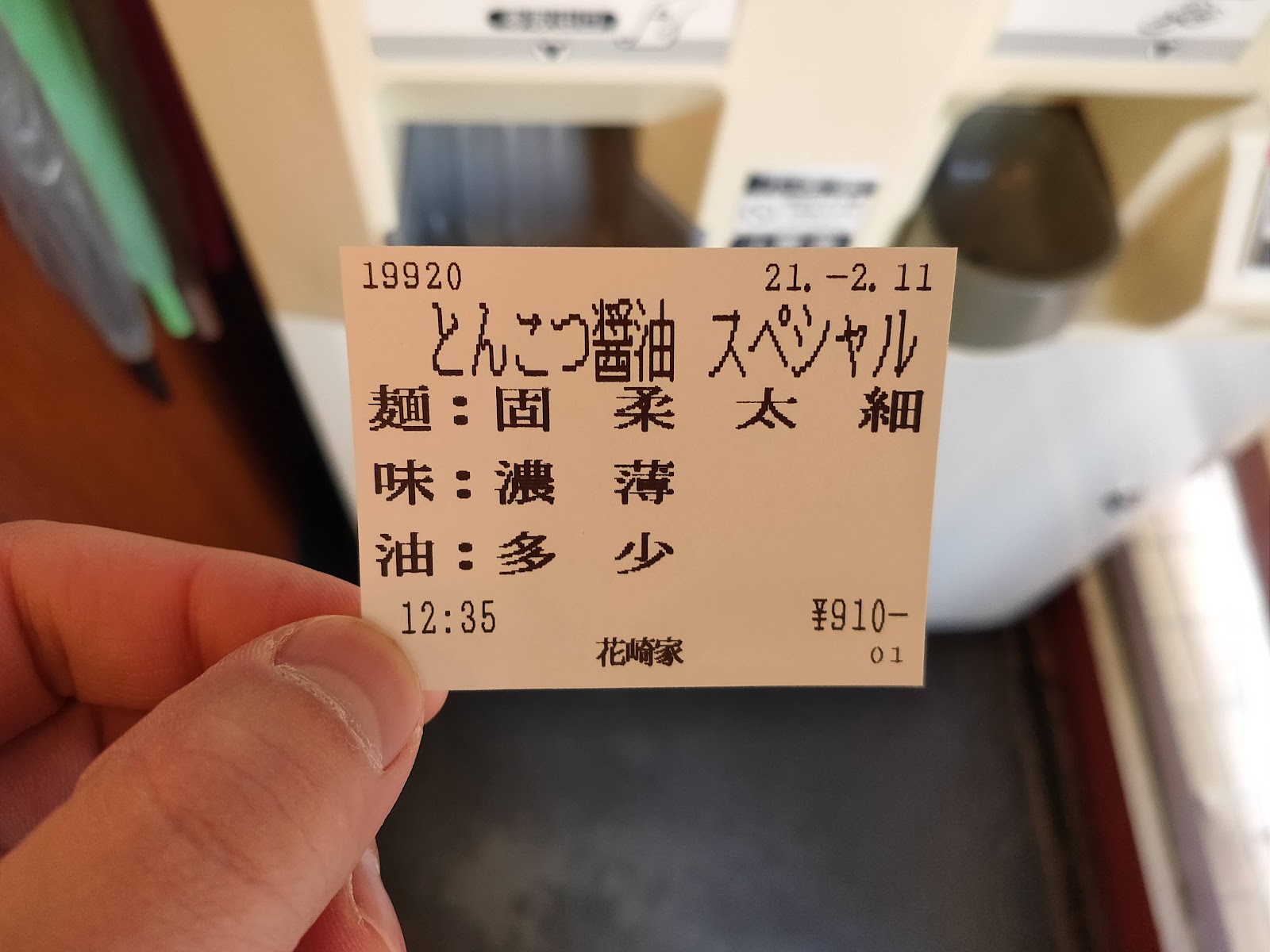 I ordered the most popular item on the menu, the Tonkotsu Soy Sauce Special.

In this restaurant, you tell the staff about how thick, hard, and densely flavored you would like your ramen, which is typical of Iekei restaurants. 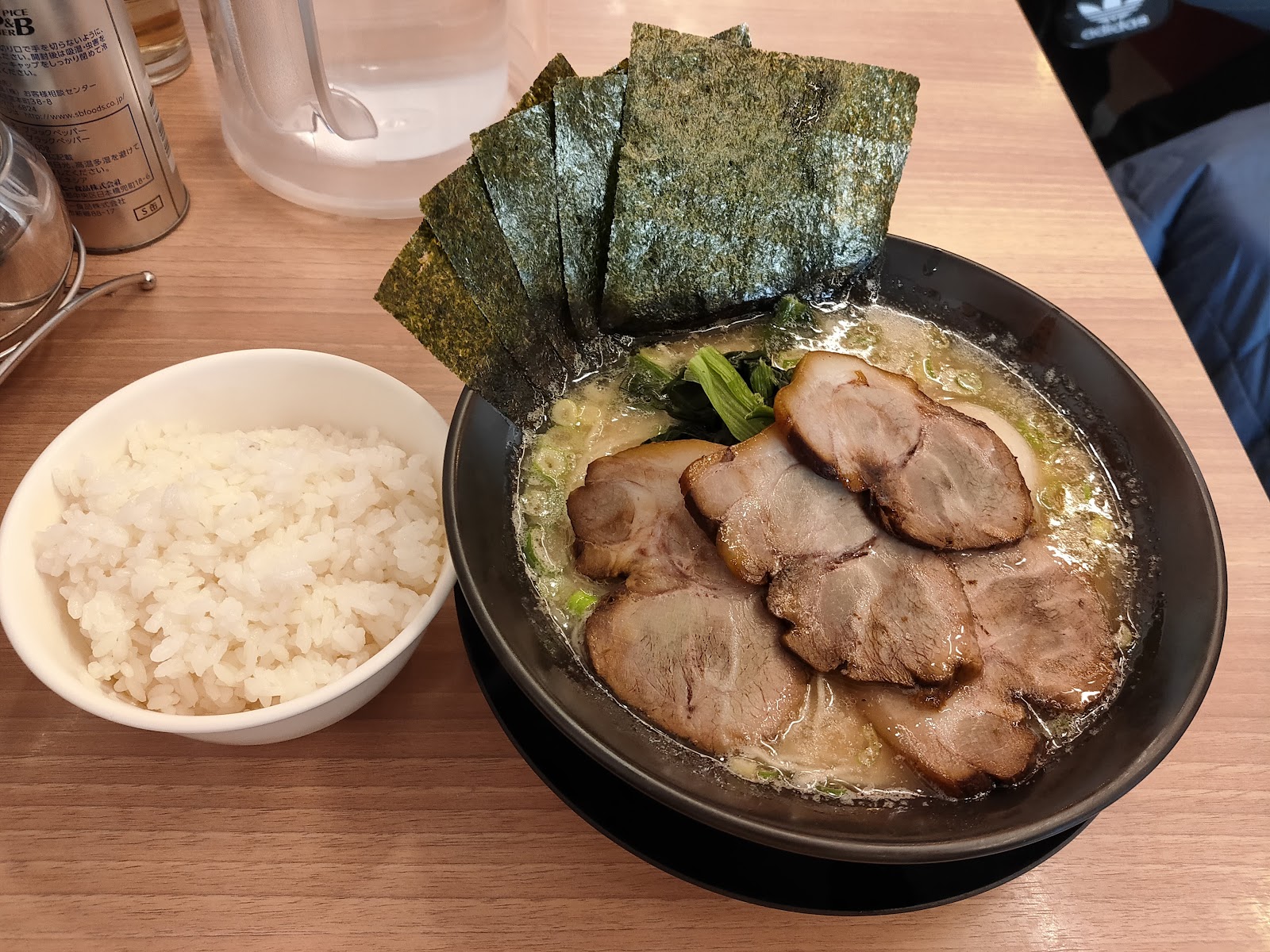 Although there was only one staff member there, my ramen arrived promptly after I ordered it, which might have been because it was at a time when there usually aren't a lot of customers there.

The ramen is iekei, so that means that it is eaten with rice. Rice is a power food mainly consisting of carbohydrates that's eaten as a side dish to the strongly flavored ramen. 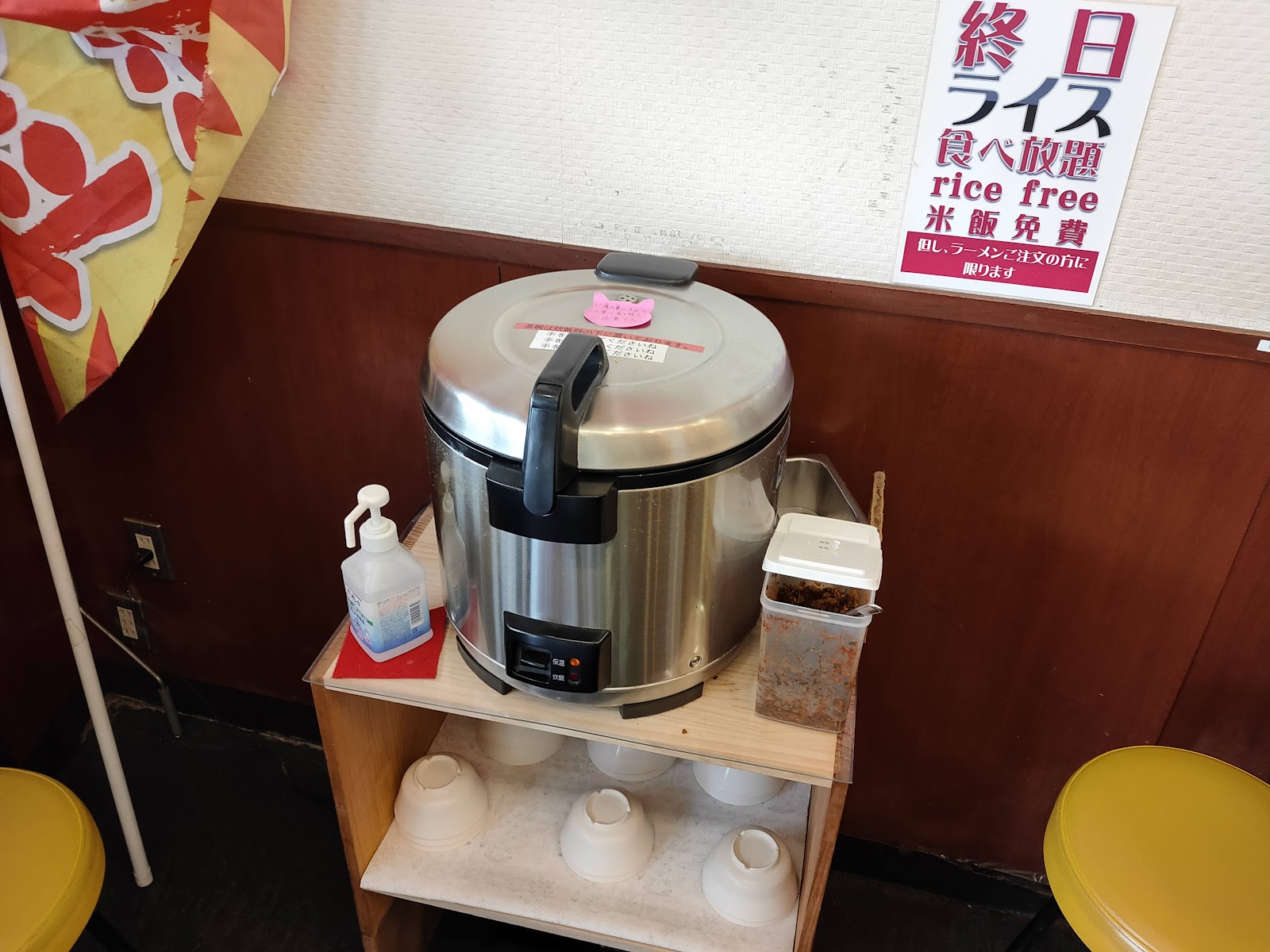 The rice is all-you-can-eat, all day long. After disinfecting your hands, you help yourself to it. 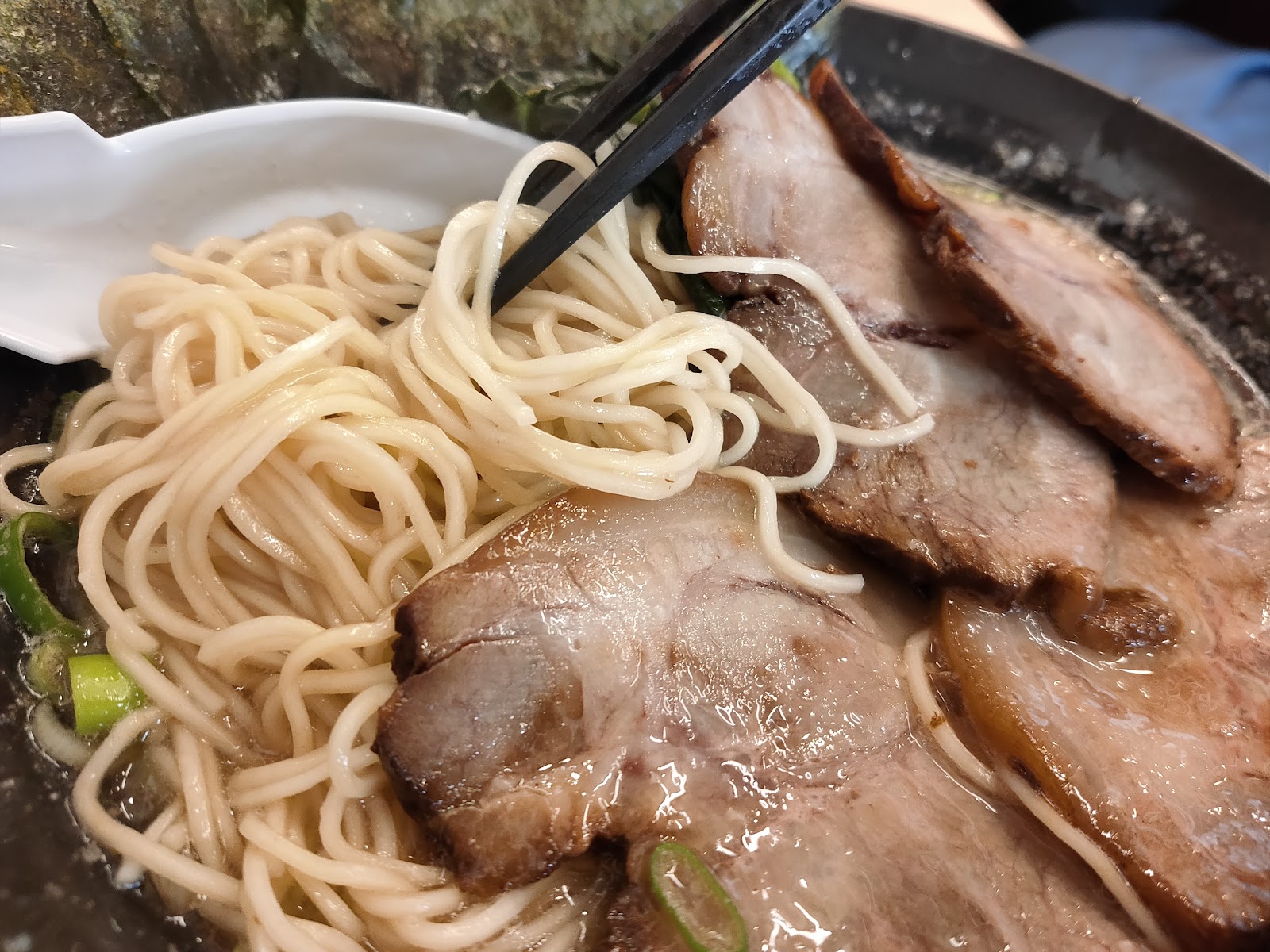 Because I ordered a strongly flavored ramen with thin noodles, the noodles were well-blended into the broth, followed by the rice.

With the exception of those who don't really like strong flavors, the strength of the flavoring is probably normal for most people. 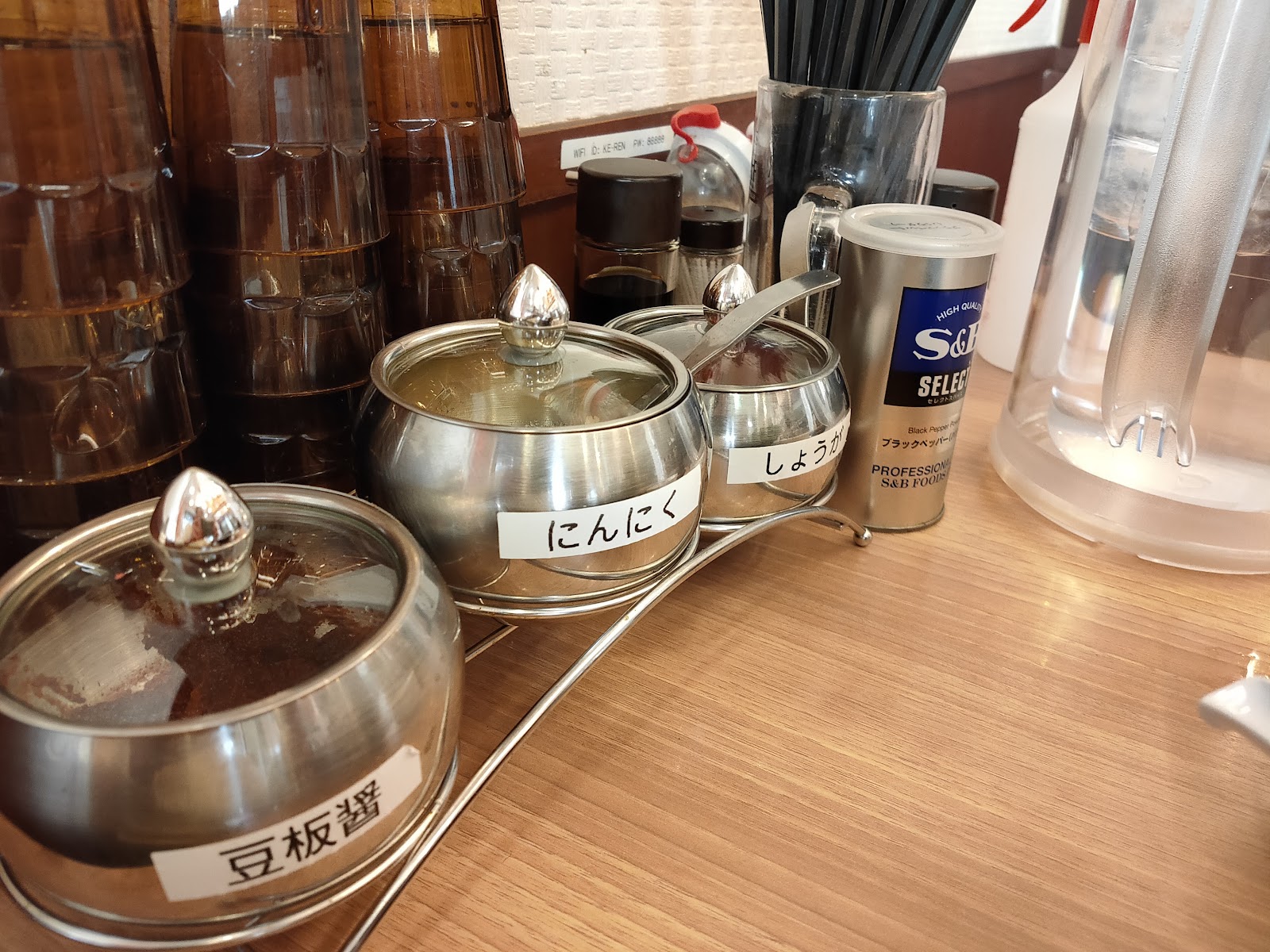 There are also plenty of condiments.

If you want to eat until you're full, then you'll probably get a good bang for your buck here. 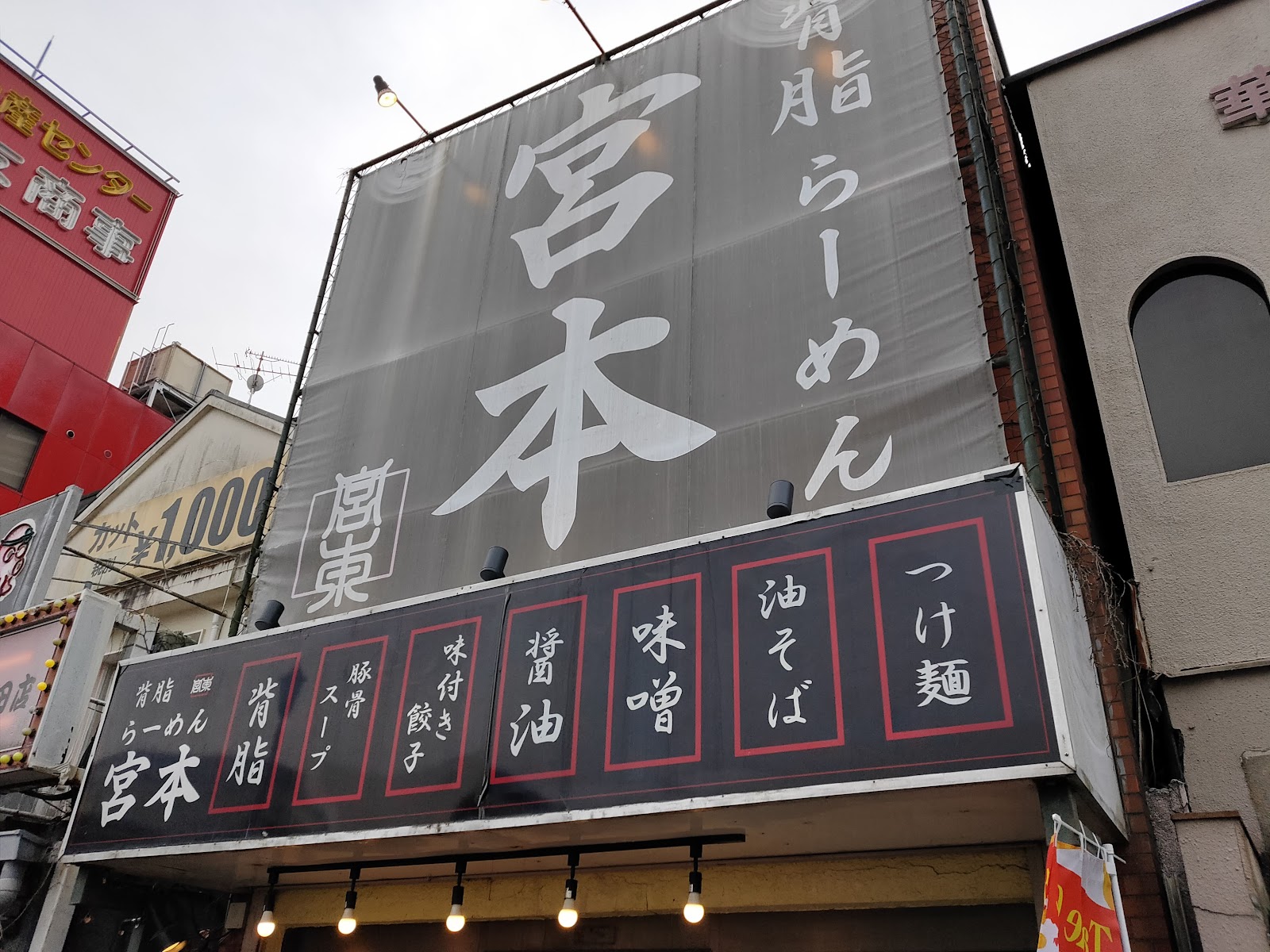 Although this ramen restaurant is usually open 24 hours a day and is easy to get to because of its good location, it had shortened business hours because of the state of emergency when I frequented it. 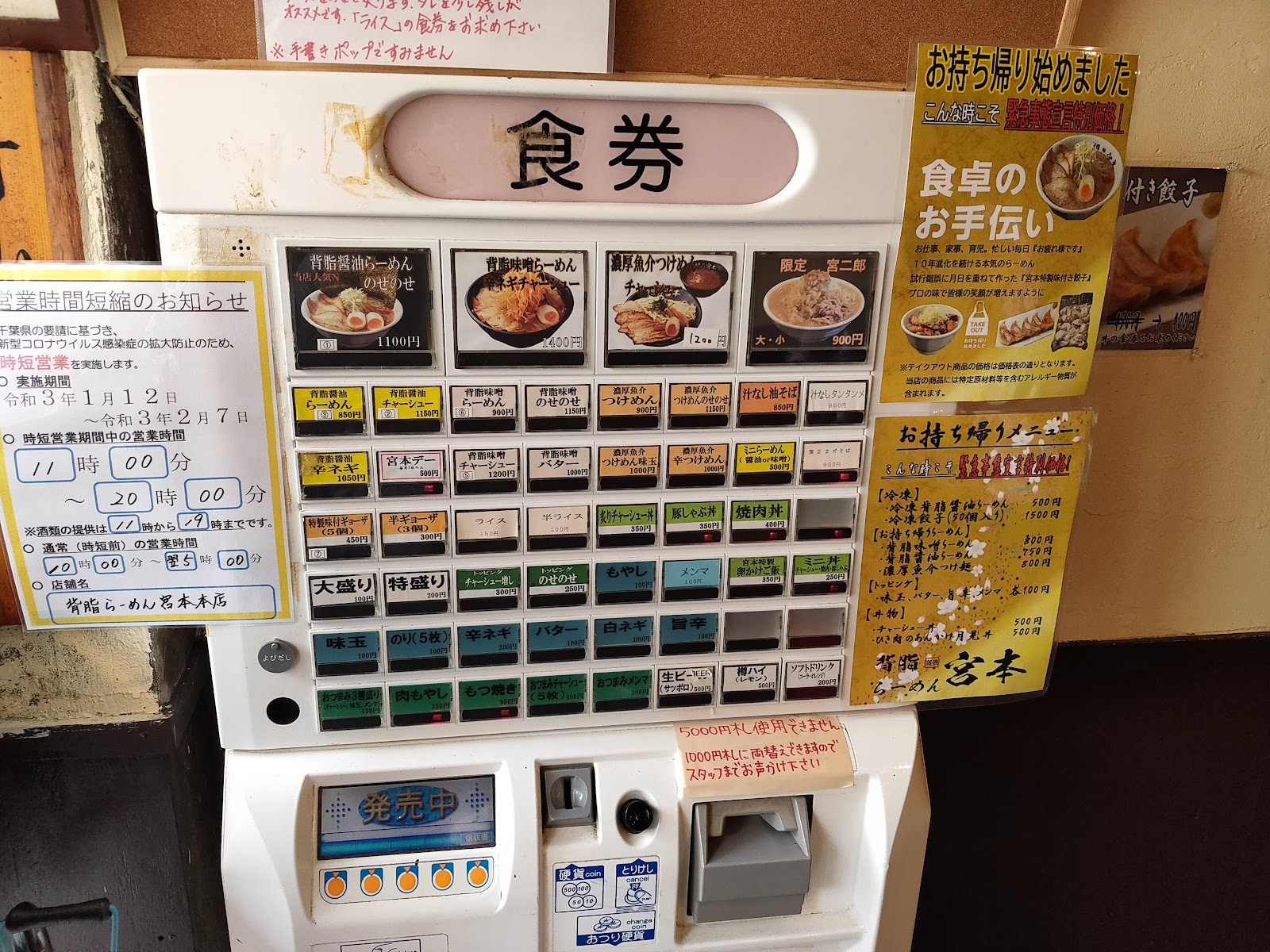 Its seating layout only consists of a U-shaped counter. 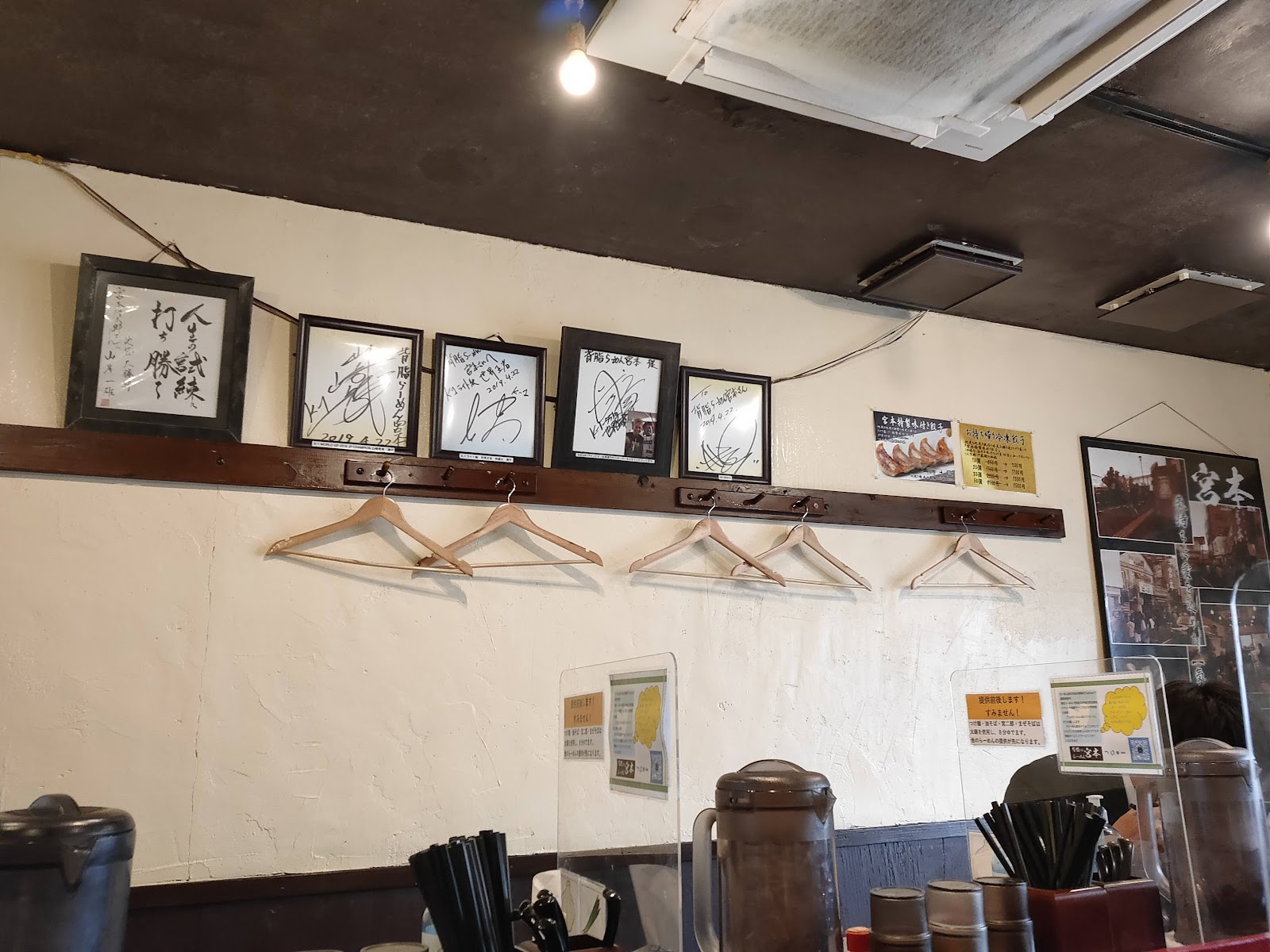 Miyamoto actually has several franchise restaurants in the Kanto region, but the restaurant in Narita is its main restaurant.

Because they sponsor a K1 fighter, the interior of the restaurant has been decorated with many autograph boards signed by K1 fighters. 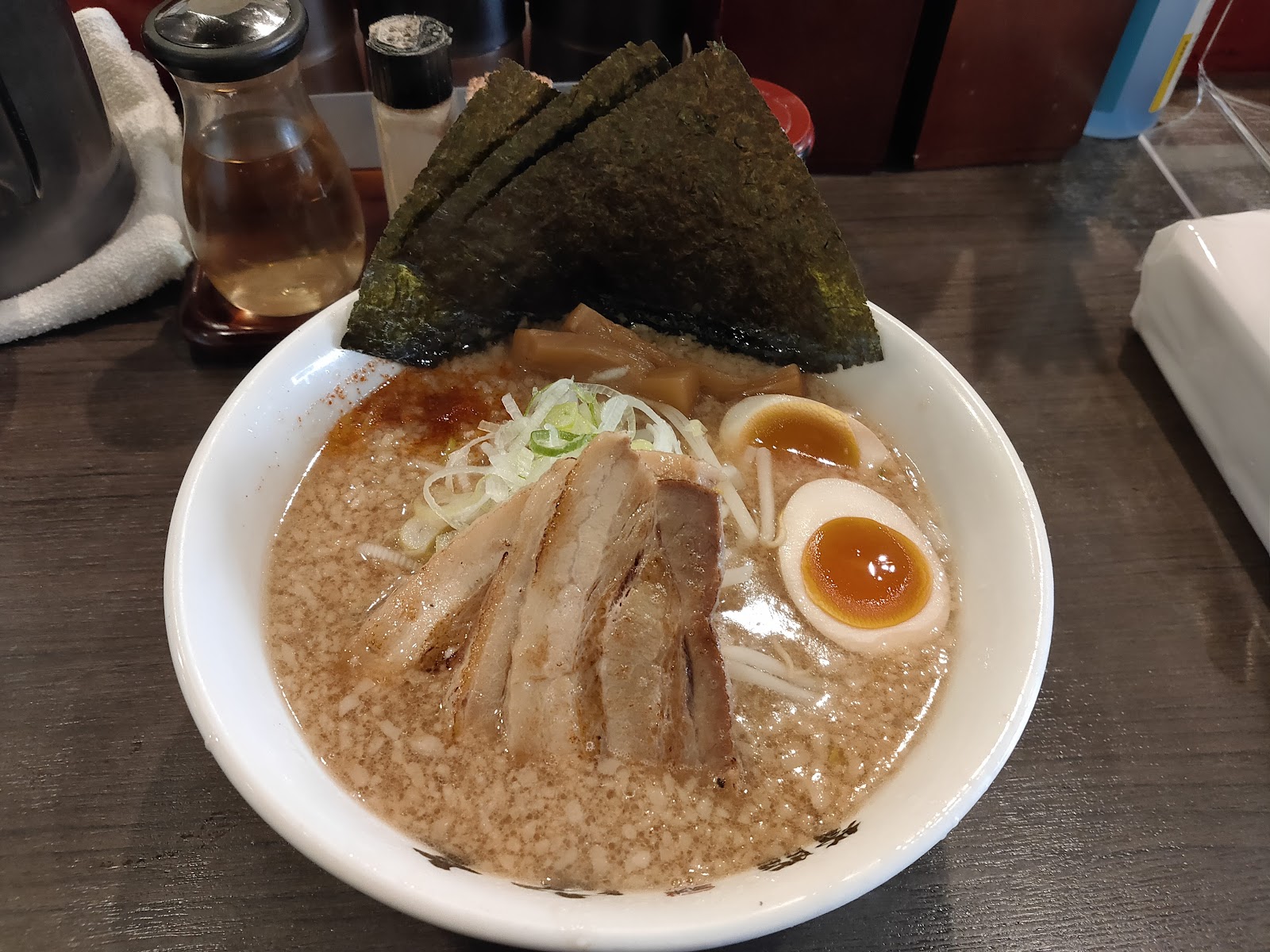 This is their most popular dish: Soy Sauce Ramen with copious Backfat (Seabura)

As its name suggests, there is backfat floating on the broth, showing you the richness you were expecting. 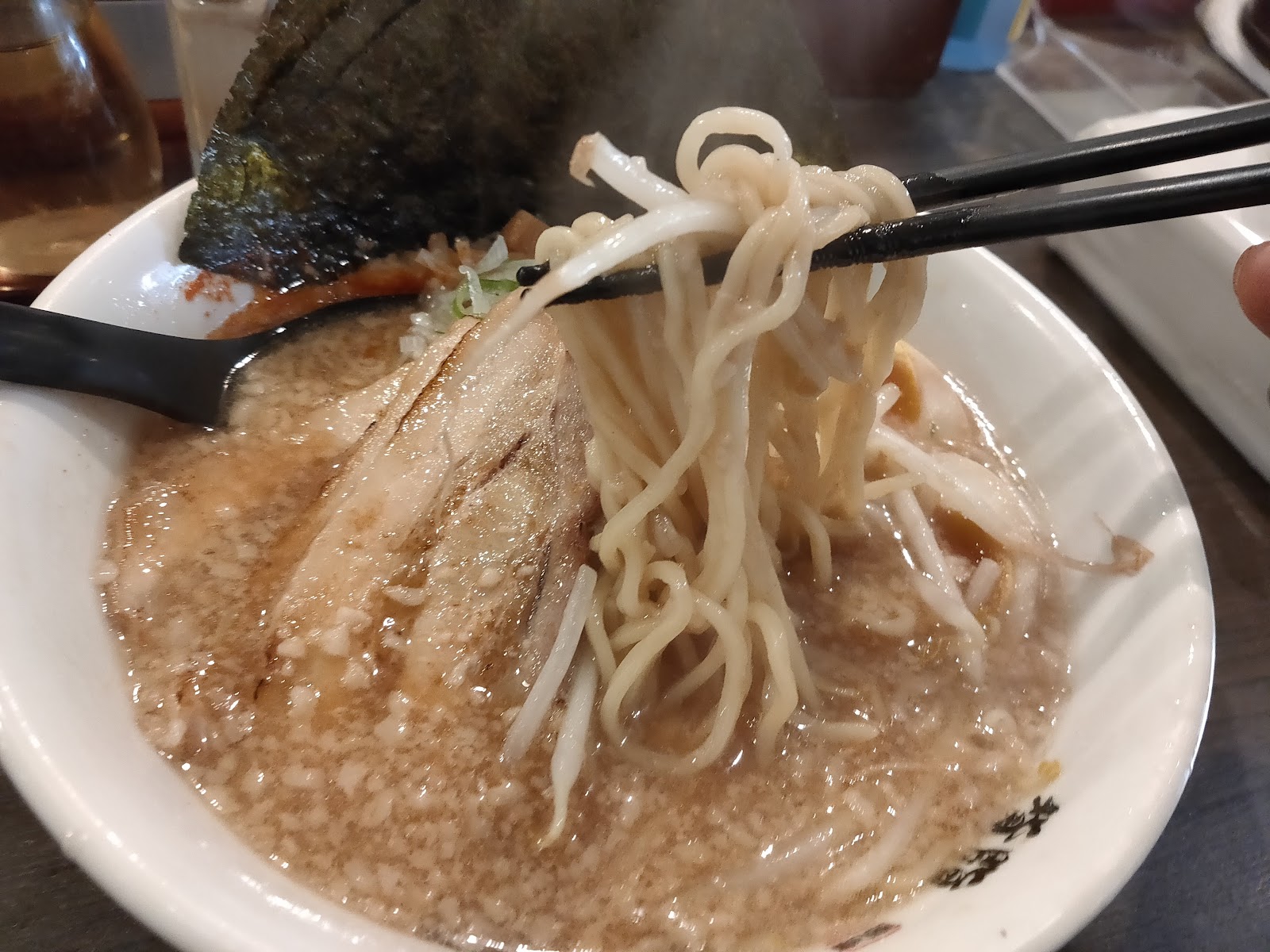 The noodles are medium-thick.

The ramen looks quite impactful, but it's not as rich as you might expect, and you can enjoy the flavor until you finish it without feeling full.

Many people walk a lot when sightseeing in Narita, so this might be a good place to visit if you'd like to regain your energy.

There are still many other ramen restaurants in Narita!

In this article, I only told you about ramen restaurants that are near stations and are relatively easy to get to.

In addition to these ramen restaurants, there are still many other restaurants that are within walking distance from the stations.

If you ever find yourself with time on your hands in Narita, you might want to make a ramen pilgrimage and discover ramen restaurants that you yourself like.